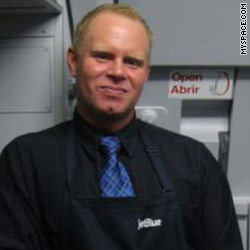 The JetBlue flight attendant chose a rather interesting way to end his career, and may become, as a columnist suggests, a folk hero in the era of flight rage.

On Monday, Slater was working on a flight landing at JFK airport that had traveled from Pittsburgh. When a passenger stood up as the plane was approaching the gate, Slater told the passenger to remain seated. The two exchanged heated words. A physical altercation ensued with Slater somehow getting hit in the head with the passenger's bag. When Slater demanded an apology and was refused, the flight attendant then came on the PA system, and dressed down the passenger with expletives.

As the plane landed, Slater then made reference to his tenure as a flight attendant before saying "It's been great!" He then grabbed a beer from a refreshment cart, pulled the emergency exit escape hatch, and slid down the inflatable slide.

Patrick Smith, columnist for Salon's "Ask the Pilot," considers Slater "the D.B. Cooper of the peanuts-and-pretzels set.... Hero to the underpaid, overworked flight attendants who regularly endure the wrath - and occasionally the fists and feet - of belligerent passengers," Smith writes.

She is among a core group of journalists on the Gitmo beat since 2002, and thus, has literally watched Omar Khadr grow up. In an interview yesterday with NPR, Shephard recalled first seeing him in 2002. "When he first appeared in court, he looked very much like a teenager," she recalled. "The man who was in court Monday is very much a 23-year-old man. He is tall. He's burly. He's got a full beard, and yet his demeanor in court is still rather childish."

Shephard will remain in Guantanamo to cover the military commission, but barely. In May, she and three other reporters were banned by the Pentagon from covering the case because they allegedly disclosed the name of a witness that was not to be identified. Critics lambasted the Pentagon for questionable tactics, particularly since Shephard and another reporter, Carol Rosenberg, are considered two of the foremost authorities on Khadr and Guantanamo respectively. Rosenberg, for example, has traveled to Gitmo more than 100 times. By July, however, Shepard and Rosenberg were reinstated.

More than five years after his death, the iconic host of NBC's "Tonight Show" has reportedly bestowed upon the John W. Carson Foundation what is believed to be the largest sum of money ever provided by a celebrity philanthropist.

According to tax documents obtained by The Smoking Gun and filed with the IRS on May 19, Carson's personal trust delegated $156 million to the foundation. The figure apparently "dwarfs" that of the next known celebrity philanthropist, David Geffen, whose foundation reports assets of approximately $80 million, The Smoking Gun reported.

The foundation, established by Carson in 1988, was awarded $35.2 million in cash and $121.2 million in securities and royalty rights, according to The Hollywood Reporter. Prior to that, Carson and his trust had allocated smaller chunks of money annually. Beneficiaries of the foundation have included the Children's Hospital of Los Angeles and Planned Parenthood, the Reporter said.

The Smoking Gun: Carnac the Munificent