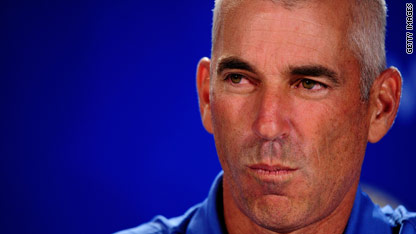 As the PGA Championship gets under way this week  in Haven, Wisconsin, the latest brouhaha over Tiger Woods (no, he hasn't misplaced his cell phone) pits Golf Channel contributor Jim Gray against U.S. Ryder Cup captain Corey Pavin.

Gray reported this week that Pavin told him he'd use a captain's pick on Woods if he failed to make the U.S. PGA team on points. (Now, why would Woods fail to make ... the ... oh, never mind).

Pavin took to his Twitter account Wednesday to counter Gray's account of events. "For the record, @golfchannel and Jim Gray has misquoted me re: picking Tiger. I never said such a thing and will not say a thing until 09/07," he tweeted.

Gray later confronted Pavin after a news conference, allegedly calling him a liar and pointing his finger at him saying, "You're going down."

Gray, quoted by the Golf Channel, said he stands behind his story "100 percent," and that Pavin "challenged my credibility and I felt that a private conversation with Corey was needed."

Gray said that at no time during the conversation was anybody "threatened."

Public sentiment is not exactly on Gray's side these days, especially after that very public and drawn-out Lebron "Decision" thingy he orchestrated last month.

While the Gray-Pavin smackdown was brewing, Jack Nicklaus, aka the Golden Bear, was reverting to championship form this week at the new Golf Course at Benton Harbor.