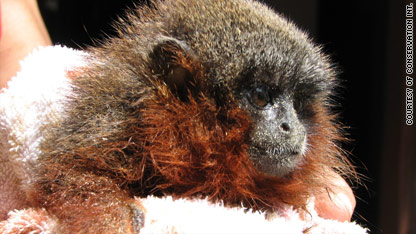 A new species of monkey that sports a bushy red beard has been discovered in the Amazon, researchers announced this week, but the primate is at risk of becoming extinct.

The species of titi monkey, Callicebus caquetensis, is a cat-size creature and has grayish-brown hair. Its long tail is stippled with gray, and it has a bushy red beard around its cheeks.

Unlike other monkeys closely related to it, Callicebus caquetensis does not have a white bar on its forehead, environmental nonprofit group Conservation International said Thursday. The finding was also published in the journal Primate Conservation.

Hints that an unknown primate species was living in Colombiaâ€™s CaquetĂˇ region, close to the border with Ecuador and Peru, surfaced 30 years ago, but researchers were never able to access the region because of violence and insurgent fighting.

It was only two years ago that professors Thomas Defler, Marta Bueno and their student, Javier GarcĂ­a, from the National University of Colombia were able to travel up the upper CaquetĂˇ River. They used GPS to find their way around the area, searching for the monkeys on foot and listening for their calls.

"This discovery is extremely exciting because we had heard about this animal, but for a long time we could not confirm if it was different from other titis,â€ť Defler said in a statement. 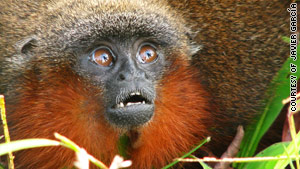 Unlike most primates, these titi monkeys form lifelong relationships. Researchers reported that pairs are often seen sitting on a branch with their tails entwined. They usually have one baby per year.

But this newly discovered species is struggling to survive because of deforestation. It is estimated that fewer than 250 CaquetĂˇ titi monkeys exist â€“ a healthy population should be in the thousands.

The small population size and the fragmented habitat should qualify the species as critically endangered, according to criteria from the International Union for Conservation of Nature, which means that it faces an extremely high risk of extinction in the wild in the immediate future.

"This discovery is particularly important because it reminds us that we should celebrate the diversity of Earth but also we must take action now to preserve it," said JosĂ© Vicente RodrĂ­gue, head of science at Conservation International in Colombia and president of the Colombia Association of Zoology.