The bureau had issued a permit to the group running the California 200, in which a truck crashed into spectators along the course in the Lucerne Valley area of San Bernardino County. In addition to those killed, four people were taken to hospitals in serious condition, and five others suffered minor to moderate injuries.

Police have said no safety barriers were in the area where the crash occurred during the race, which was part of an amateur series sanctioned by Mojave Desert Racing.

On MDR's website, the group asks spectators to stay 100 feet from the course. Video from the night of the crash show trucks speeding within feet of spectators. 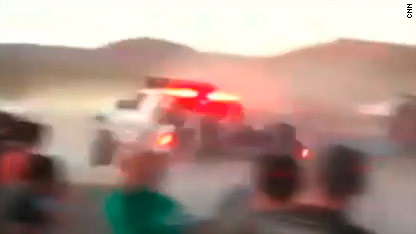 END_OF_DOCUMENT_TOKEN_TO_BE_REPLACED

A federal appeals court in San Francisco has blocked same-sex marriage in California, until it hears broader questions over the constitutionality of such marriages. The brief order from the 9th Circuit Court of Appeals set aside a federal judge's decision August 4 permitting same-sex marriages to resume.

The permanent stifling of the ruptured Gulf of Mexico oil well won't start until the latest potential problem is evaluated, Thad Allen, the government's point man in the Gulf, said Monday.

The "timelines won't be known until we get a recommendation on the course of action," he said.

Allen told reporters that when it comes to giving a green light to the "bottom kill" of the well through the nearby relief well, "nobody wants to make that declaration any more than I do," but the process "will not start until we figure out how to manage the risk of pressure in the annulus."

The annulus is a ring that surrounds the casing pipe, which sits in the center of the well shaft. Unless the annulus is breached, it should be accessible only from the bottom of the well.

Scientists began new pressure tests last week to gauge the effects of the mud and cement poured into the well from above during the static kill procedure that started August 3 and ended a few days later. From those pressure readings, they believe that either some of the cement breached the casing pipe and leaked into the annulus or cement came up into the annulus from the bottom.

After touring the ZBB Energy Corporation plant in Menomonee Falls, Wisconsin, Obama told workers that their jobs manufacturing renewable batteries and power systems were part of a necessary transition of the U.S. economy.

"We can't turn back. We've got to keep going forward," Obama said to applause, later adding: "You're pointing us in the right direction. And I am confident about our future because of what I have seen at this plant."

The company is using a $1.3 million Recovery Act State Energy Program loan to help fund a $4.5 million factory renovation. Obama said the renovation is expected to result in the hiring of 80 new workers and triple the capacity manufacture renewable power and storage systems.

In what sounded at times like a pep talk and at times like a campaign speech, Obama said American workers were resilient enough to emerge stronger than ever from a decade-long manufacturing decline and an economic recession.

The repairs performed on the International Space Station's cooling system Monday morning appear to be working.

All of the fluid lines are connected and no ammonia leaks were reported, according to NASA's Twitter feed. 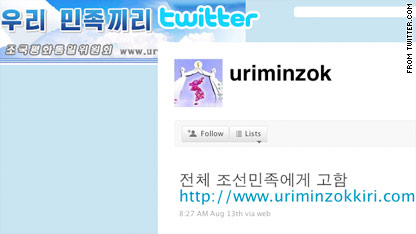 Many of the tweets on the reported North Korean Twitter account are links to the country's official site.

North Korea Twitter account – 140 characters may be small, but it is becoming a big deal that the secretive North Korean government has opened a Twitter account, according to a report from Agence France Presse. So far the Twitter account @Uriminzok only has about 1,600 followers and most of the tweets are links to the country's official Web site.

AFP says one of the tweets dismissed accusations that a North Korean torpedo sank a South Korean warship in March while another criticized US-led sanctions against North Korea and Iran. This isn't North Korea's first foray into social media as the country opened a YouTube account recently.

China/Japan – Lots of people are searching on Google for the news that China is on track to overtake Japan as the world's second largest economy, according to figured released Monday.

Obama and the 'Ground Zero Mosque' – There's lots of discussion on social sites about the proposal to build an Islamic center and mosque near the site of Ground Zero after President Barack Obama weighed in on the controversy over the weekend. After seeming to support the controversial Islamic center, Obama then clarified his remarks by saying he was "not commenting on the wisdom" of the project but simply trying to uphold the broader principle that government should treat everyone equal, regardless of religion.

The debate continues to rage as the world's Muslims observe Ramadan, which has been a trending topic on Twitter since the holy month began. Check out CNN's Belief Blog for lots of interesting perspectives and stories on the proposed mosque.

What's your take on these stories? What else should we be paying attention to? Post a comment and let us know.

As an umbrella group of humanitarian entities called for "urgent international support" Monday in flood-ravaged Pakistan, the United States was sending materials to provide shelter for almost 47,000 displaced Pakistanis.

The U.S. Embassy said that a cargo aircraft carrying 530 rolls of heavy-duty waterproof and fire-resistant plastic sheeting for use as temporary shelters was sent by the United States to Karachi, Pakistan, on Monday, a day after another flight ferried 240 rolls of plastic sheeting to Karachi.

"Our experience has shown that plastic sheeting is urgently needed for temporary shelters, and we know it is urgently needed in Sindh as the flood waters continue to move south," Ambassador Anne Patterson said in a written statement. "It will be supplied along with locally purchased materials that can be easily moved when people are able to return home." 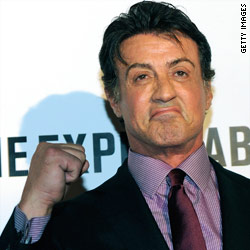 The action star from the '70s and '80s can still open big at the box office, and apparently big with the ladies. Recruiting a cast of six fellow action stars, along with a cameo by Bruce Willis and Arnold Schwarzenegger, Stallone's "The Expendables" grossed $35 million at the box this weekend.

The "Rocky" and "Rambo" star not only starred in the picture, which received mixed reviews, he wrote and directed the film as well. He also reportedly broke his neck in a fight scene.

In July, Stallone appeared on the David Letterman show with where he said he'd broken his neck during a fight scene for the film. The injury required surgery. Also appearing in the film are action stars including Dolph Lundgren, Eric Roberts, Mickey Rourke, wrestler Steve Austin, Jet Li and Jason Statham.

Los Angeles Times: 'The Expendables' is a force at weekend box office 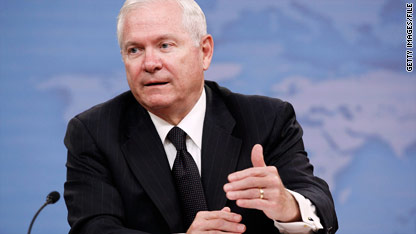 Defense Robert Gates is expected to leave his post in the spring of 2011, a senior administration source told CNN on Monday.

A Pentagon spokesman confirmed that Gates wants to retire some time next year. Gates was quoted in an article in the magazine Foreign Policy published Monday saying he wanted to step down before the end of 2011.

According to the senior administration official, Gates privately promised President Barack Obama he would not leave the Cabinet in 2010 in order to maintain stability at the Pentagon while more U.S. forces are heading to Afghanistan.

In addition, the senior official said, Gates does not want a potentially difficult confirmation battle for his successor to take place in the presidential election year of 2012.

Gates, who became defense secretary in 2006 under former President George W. Bush, stayed in the post when Obama took office in 2009.

He previously spent almost 27 years in the Central Intelligence Agency, including posts at the White House serving four presidents. Gates also was president of Texas A&M University prior to becoming defense secretary.

Race car driver apologizes - The driver of a truck that crashed into a crowd of spectators, killing eight, said in a Facebook message that he was devastated. The California Highway Patrol identified the driver as Brett Sloppy. Authorities said Sloppy is not facing any charges in Saturday's crash at an off-road race in Southern California's Mojave Desert.

"Soo incredibly lost and devistated [sic] my thoughts and prayers go out to all the familys and friends involved," the San Marcos resident said on his Facebook page late Sunday. "Thank you too all my friends for sticking with me even thru these tragic times I love you all."

Apparent suicide by Craiglist killing suspect - An autopsy is scheduled for Monday in the death of Philip Markoff, a one-time medical student who died of an apparent suicide while facing charges in a killing tied to the Craigslist website. Markoff was found unresponsive Sunday morning in his Boston, Massachusetts, jail cell and pronounced dead by medics, officials said. Markoff, 24, was charged in the April 14, 2009, fatal shooting and attempted robbery of Julissa Brisman, 25, at Boston's Marriott Copley Place Hotel.

END_OF_DOCUMENT_TOKEN_TO_BE_REPLACED

[Updated at 8:15 a.m.] One passenger was killed and 34 were injured when lightning hit an airplane and caused it to split into at least two parts when landing early Monday on the island of San Andres, Colombia, Gov. Pedro Gallardo told CNN en Espanol.

The fatality was identified as Amar Fernandez de Barreto.

[Posted at 7:54 a.m.] One passenger died and 34 were injured when bad weather caused an airplane to split into three parts when landing early Monday in San Andres, Colombia, the national police said.

This story is developing. We'll bring you latest information as soon as we get it.

6:55 am ET - Spacewalk outside ISS - Two astronauts will install a replacement pump to restore full cooling capability to the international space station.

END_OF_DOCUMENT_TOKEN_TO_BE_REPLACED

An update from the CNN newsdesk in London on some of the stories we're following on Monday:

Strike talks - Talks are being held today in the UK between the trade union Unite and representatives from the company BAA in order to try to avoid a strike by airport workers. BAA operates six airports in the UK and if the strike goes ahead, it will cause chaos for European passengers as Heathrow, Edinburgh and Glasgow are among the airports that would have to close.

South Africa press - South Africa prides itself on having one of the most aggressive and free presses on the continent. But this could change if the ruling party gets its way. Embarrassed by media allegations of corruption and mismanagement, the ANC is trying to push through a bill which opposition parties and press watchdogs say will criminalize investigative journalism. Under the new proposal journalists can be jailed for up to 25 years if found in possession of classified state information.