Many Pakistani streets and valleys are submerged in water, and in some areas you can't tell where the waterways end and the flooding begins.

In other locales, most of the structures are simple gone. Monsoon rains left about one-fifth of the country underwater, and children and adults wade through the filthy aftermath pleading for help. 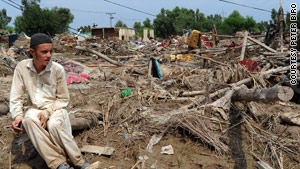 Almost all the mud houses at Azakhel camp have been turned into clay.

Peter Biro of the International Rescue Committee, an aid agency, has surveyed the damage since relentless flooding two weeks ago washed over the country, destroying homes, taking lives and ruining entire villages.

"I was just walking down by the river and it’s completely devastated," Biro said. "Even the bigger houses are collapsing. The roofs are falling out. There are huge concrete slabs in the water and smaller houses are just gone. The poor houses have completely vanished."

In many of the areas struggling to cope with the floods, residents had already struggled with armed conflict in the area and were beginning to recover, Biro said.

That all changed with this month’s deluges.

"The big problem for the aid groups is how very difficult the area is to get through," Biro said, noting that for even aid groups and people who know the area well, getting to your destination is immensely problematic.

"It's extraordinarily hard to get to anyone. Driving here, along the way you see all the bridges are damaged. Big concrete bridges that carried trucks are gone and, of course, the smaller bridges too," he said. "And it’s not just the big rivers that are overflowing; it’s small streams that are also creating a lot of damage, too." 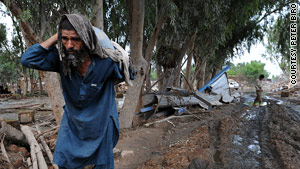 The Afghan refugees have lived at Azakhel for decades. Now they have once again been forced to flee again, with many living on a highway.

Swollen rivers and tributaries in some residential neighborhoods breached their banks, making the flooding worse.

"There are just so many people who live close to one. How do you begin to fix the lives of millions of people?" Biro asked.

Despite the frustration and challenges, Biro and his IRC colleagues are pushing ahead to help whoever they can.

Once the floodwaters begin to recede, putting the Pakistani people back on their feet will be difficult. The dangers of flooded streets and villages will be replaced by the threats of contaminated drinking water, waterborne disease, cramped shelters and an inability to maintain hygiene, Biro said.

"People are being forced to drink bad water and we're seeing an increased number of diarrhea cases and skin infections," Biro said.

"And that is going to be the big challenge going forward. That's the second disaster." 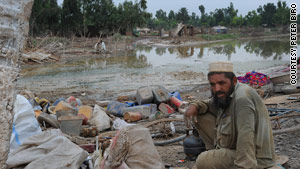 A refugee sits among what was formerly his home in the Azakhel camp near the city of Peshawar in Noshewera district, Khyber Pakthunkhwa province.

The IRC is hoping that by distributing water-purification tablets they can curb the spread of disease.

"The next critical step for us will be to clean out and disinfect wells and bring clean water via tanker trucks to the devastated communities," Biro said.

For many, the end seems far away. Gone not only are the towns and structures they called home but also the things Pakistanis need to subsist.

"Now the people, of course, have no income," Biro said. "They say they've lost their sewing machines, their bicycles that they run errands with. They have very little left."

For those staying in refugee camps, the situation was already desperate. Biro said one camp with 30,000 refugees was completely washed away, forcing these people to flee the very place where they once sought refuge. 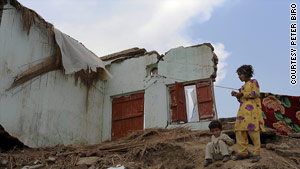 At least 1,600 people have been killed and 20 million impacted by the flooding throughout Pakistan.

"They are just sitting around. A lot of them were sitting on the side of the highway under canvas tents," he said.

With aid sparse and food distribution slow because of infrastructure challenges, Pakistanis are relying on neighbors on higher ground who may have something to share.

"People keep saying that they don't have enough food. It’s donations basically, so that's a very strong component in people's survival – relying on each other," Biro said.