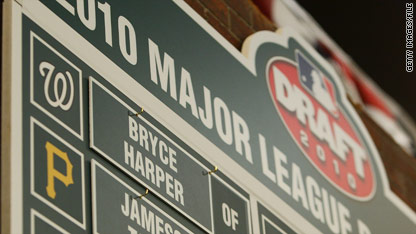 The No. 1 overall pick in the MLB Draft is signed, sealed and delivered – though the process wasn’t without its drama.

While the negotiations went down to the wire, SI.com’s Joe Lemire says not getting the deal done was just too much of a risk for both sides.

In the end, Harper received a $6.25 million bonus and $9.9 million in guaranteed money on a five-year deal, eclipsing the previous record for a position player (Mark Teixeira received $9.5 million in 2001).

There’s plenty of on-the-field action filling the sports docket on Tuesday with baseball, soccer and tennis. Here are a couple highlights (all times Eastern).

Rangers at Rays (7:10 p.m., FSSW, Sun Sports). The potential playoff preview continues as the AL West-leading Rangers face the Rays, who moved into a first-place tie with the Yankees after rallying for a 6-4 win Monday.

Young Boys vs. Tottenham Hotspur (2:45 p.m., FoxSoccer.TV). Neither side has ever made it to the Champions League, but one will take a step forward as they open their two-leg playoff.

1 – Number of times an Arkansas radio personality has to wear a Florida Gators hat in public before losing her job. Renee Gork announced on Twitter that she had been let go by KAKS two days after the Florida alum wore a Gators lid to a press conference with Razorbacks coach Bobby Petrino.

12 – Stitches Eli Manning needed after suffering a three-inch gash to the left side of his temple during the Giants’ 31-16 preseason win over the Jets.

37 – The Blue Jays’ Jose Bautista had never hit more than 16 home runs in a season, but he’s left that career high in the dust, blasting his league-leading 37th home run Monday. He is also third in the majors with 89 RBIs.