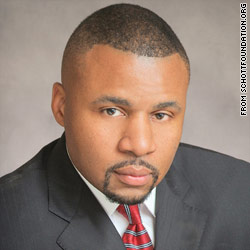 He is overseeing the release of an education study that showed in the 2007-2008 school year, only 47 percent of African-American males attending high school in the U.S. actually graduated.

"Yes We Can: The Schott 50 State Report on Public Education and Black Males 2010" is a study on academic parity in the U.S. that was released today.

The study by the Schott Foundation comes out every two years.

Jackson, 37, joined the Schott Foundation as CEO in 2007. He is a product of Chicago's Southside, and its public school system. It was during his time in the public schools there that he realized the disparity between blacks and whites in education.

The 30-year-old British man is tweeting the entire Bible, one chapter per tweet per day. Chris Juby of Durham, United Kingdom, began his effort on August 8 and as of today has more than 8,700 followers, according to his Twitter page. The summaries can never exceed 140 characters, per Twitter rules. Here are some examples:

"Gen1: God created the heavens, the earth and everything that lives. He made humankind in his image, and gave them charge over the earth."

"Gen2: God formed a man and gave him the garden in Eden, except for the tree of knowledge. Adam was alone so God made a woman as his partner."

"Gen7: Noah and his family went into the ark with two of each creature. It rained for forty days and forty nights and the earth was covered."

In a story that first broke last week in the Northern Echo newspaper in Durham, Juby said is should take approximately 1,189 days to summarize the text, which is actually about 800,000 words long. If all goes as planned, he should complete the task on November 8, 2013, Juby said.

Juby, who is a web developer and leads worship at King's Church in Durham, admits that not many Christians read the whole Bible and that this is by no means a substitute for it.

"It is perhaps regarded as a bit of an oddball thing to do," he said. "I hope in doing the summary, it will inspire people to read the Bible for themselves."

The Northern Echo: Chris Juby is tweeting one Bible chapter a day

The Hunchback of Notre Dame

Evidence has been uncovered that around the 1820s, a hunchbacked man was employed at the famous French cathedral, and that he could be the influence for Victor Hugo's famous literary classic.

Adrian Glew, who is the head archivist at London's Tate Archives, told the Daily Telegraph of London earlier this week that while he was researching a memoir of another early 19th Century stonemason named Henry Sibson, he came across the following passage:

"I applied at the Government studios, where they were executing the large figures [for Notre Dame] and here I met with a Mons. Trajan, a most worthy, fatherly and amiable man as ever existed - he was the carver under the Government sculptor whose name I forget as I had no intercourse with him, all that I know is that he was humpbacked and he did not like to mix with carvers."

"When I saw the references to the humpbacked sculptor at Notre Dame, and saw that the dates matched the time of Hugo's interest in the Cathedral the hairs on the back of my neck rose," Glew told the Telegraph.

Sibson's memoirs - which also make reference to another Hugo contemporary named "Jean Trejean" - are on display at Tate until the end of August, according to the Telegraph.

He is one of the most prominent faces behind California's anti-gay-marriage movement and has fiercely criticized California's Governor, Attorney General and the Honorable Vaughn Walker for their roles in overturning the ban.

Thomasson, a former journalist and conservative radio talk show host is President of Save California and Save America, two organizations promoting family-friendly values in politics and society.

He's taken a stand on the boiler plate issues that dominate conservatives today - particularly Christian conservatives. Marriage as a biologically proven, heterosexual act to promote the species? Check. Spanking? Yes. Medical marijuana? Not a chance. He even has a fierce position on cross-dressing and transsexual surgery.

Recently, Thomasson has focused on California Gov. Arnold Schwarzenegger and Attorney General Jerry Brown saying they violated their oaths of office by supporting gay marriage. And Judge Vaughn Walker, the man who overturned the ban? Thomasson issued a statement that did not mince words.

Save California: Randy Thomasson on Judge Walker's refusal to stay his ruling

In light of her bonkers new movie â€śCocaine Bear,â€ť Elizabeth Banks has shared how difficult it was to convince sotwitter.com/i/web/status/1â€¦n8P9aE
cnni

In light of her bonkers new movie â€śCocaine Bear,â€ť Elizabeth Banks has shared how difficult it was to convince sotwitter.com/i/web/status/1â€¦n8P9aE
cnni