At least 235 people were arrested and 10 police officers injured following a large anti-lockdown protest in Melbourātwitter.com/i/web/status/1ā¦IM

An Alabama man has been arrested after a shooting at a casino in Biloxi, Mississippi, left one person dead, policeātwitter.com/i/web/status/1ā¦F0

A magnitude 4.3 earthquake struck Southern California on Friday evening, according to the US Geological Surveyātwitter.com/i/web/status/1ā¦5Q

A jury found real estate heir Robert Durst guilty of first-degree murder in the killing of his close friend, Susanātwitter.com/i/web/status/1ā¦8j

In a second vote, FDA advisers recommend a booster dose of Pfizer's vaccine for people 65 and older and those at hiātwitter.com/i/web/status/1ā¦vj

France recalls its ambassador to the US in response to the US' national security partnership with the UK and Austraātwitter.com/i/web/status/1ā¦51 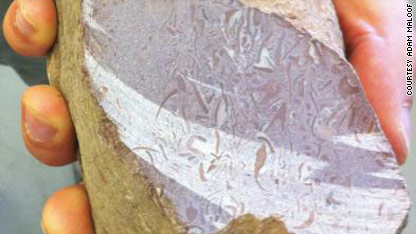 The fossils were found in an Australian glacial deposit.

Princeton geosciences professor Adam Maloof and graduate student Catherine Rose came upon the fossils while researching a massive ice age, known as the āsnowball effect,ā that left much of the planet covered in ice 635 million years ago. Scientists had thought animal life could not have survived that ice age. But as they inspected a glacial deposit in south Australia, they found the fossils of the sponge-like ocean reef animals.

āNo one was expecting that we would find animals that lived before the ice age, and since animals probably did not evolve twice, we are suddenly confronted with the question of how some relative of these reef-dwelling animals survived the 'snowball Earth,ā" Maloof said.

"We were accustomed to finding rocks with embedded mud chips, and at first this is what we thought we were seeing," Maloof said. "But then we noticed these repeated shapes that we were finding everywhere - wishbones, rings, perforated slabs and anvils. ā¦ we realized we had stumbled upon some sort of organism.ā

The scientists published their findings in the August 17 issue of the journal Nature Geosciences. Their research was sponsored by National Science Foundation's Division of Earth Sciences.

The Netherlands has long been the world's tallest nation ā but its people are getting shorter, according to Dutch rtwitter.com/i/web/status/1ā¦e1rO
cnni

3:43 pm ET September 18, 2021 RETWEET
The world's largest tree has been wrapped in foil to protect it against flames from an out-of-control fire burningātwitter.com/i/web/status/1ā¦g1
CNNweather

3:33 pm ET September 18, 2021 RETWEET
The Taliban denied claims that Afghan girls would be banned from secondary schools after calling on boys to resumeātwitter.com/i/web/status/1ā¦AB
cnni

2:44 pm ET September 18, 2021 RETWEET
The CIA warned the military that civilians, including possibly children, were present seconds before a US missile kātwitter.com/i/web/status/1ā¦zT
cnni