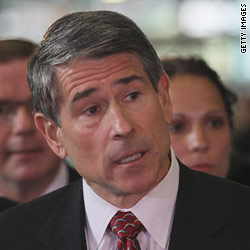 The older brother - and alleged accomplice - of former Illinois Gov. Rod Blagojevich told reporters outside a federal courthouse yesterday: "I feel bad for my brother." Robert Blagojevich, who faces a retrial himself on five charges, added that he will not cut a plea deal.

"I have lived through the most surreal experience anyone could live through," Blagojevich told The Chicago Sun-Times. The trial has been a "slow bleed," both emotionally and financially, he added. "I don't feel in any way deterred in my ability to articulate my innocence."

The two Blagojevich brothers could not be more different, according to a profile earlier this year in the Sun-Times. Robert is a lifelong Republican and military man with a southern drawl. Unlike Rod, who has increased his public profile since the indictment in 2008, Rob's previous interviews have been limited to one in 2009.

Since the indictment, the two have had a chilly relationship, the Sun-Times reported. Yet at his trial, Robert Blagojevich testified that as children growing up outside Chicago, the two were "very close, tied at the hip."

Prosecutors will meet this week to determine how they'll retry both brothers on federal charges.

The prosecutor is considered one of, if not the best, federal prosecutor in the country. Yet pundits are now wondering if Fitzgerald was heavy-handed by filing such "complicated and redundant" charges against the former governor.

Fitzgerald's televised 2008 press conference indicting Rod Blagojevich was on par with Eliot Ness, said AOL contributor Allan Lengel in a column earlier this week. He made dramatic statements claiming that the former Illinois governor had committed crimes so grave if would make "Lincoln turn over in his grave."

Yet the outcome of only one felony conviction - despite an 11-1 jury vote on one of the more serious charges - is an embarrassment for the fierce and determined prosecutor, Chicago Sun-Times columnist Carol Marin wrote Wednesday. But Fitzgerald will live to see another day and this is a blip in an otherwise nearly stellar career, Marin added.

Fitzgerald was the special prosecutor who investigated the person responsible for "outing" Valerie Plame as a covert CIA operative. Scooter Libby, the then-chief of staff to former Vice President Dick Cheney, was successfully convicted on charges related to the case.

In a 2008 profile of former FBI director Louis Freeh - a bit of a maverick himself - Freeh recommended Fitzgerald for the Illinois U.S. Attorney position because he felt Fitzgerald was the best prosecutor in the country. Since coming to Illinois in 2001, Fitzgerald successfully prosecuted former Illinois Gov. George Ryan and Canadian media baron Conrad Black. He also convicted a Chicago police detective whose interrogation techniques were considered torture.

The Sun-Times' Carol Marin said Fitzgerald was heavy-handed by charging the Blagojevich brothers with such complicated and even redundant charges. But former federal prosecutor Anthony Barkow disagreed. People might think of the mistrial as a failure, he told AOL News just before the verdict, "but I don't think it will damage his legacy because he has had such success."

Chicago Sun-Times: Everyone wins - everyone loses in Blagojevich verdict

AOL News: Star Attorney's Reputation Is on the Line in Blago Trial

AmericanLawyer.com: Two of A Kind

In his first interview since announcing he's switching teams, the NBA superstar says in the September issue of GQ magazine that he has no regrets over his decision to leave the Cleveland Cavaliers to play for the Miami Heat. Contributor J.R. Moehringer had exclusive access to James and his handlers before and after he made "The Decision."

ŌĆó James' hometown of Akron, Ohio, was considered so "country" that Cleveland kids looked down on it. As a result, Akron kids rooted for Chicago and Michael Jordan. "We hated Cleveland growing up," LeBron tells Moehringer.

ŌĆó Of Cav owner Dan Gilbert's blistering response after James' decision was announced: It "made me feel more comfortable that I made the right decision."

ŌĆó Of the televised special that turned into a public relations blunder, James told the reporter he had no regrets - he'd do it all the same way again.

Perhaps most compelling is James' insistence that if the circumstances were right, he'd go back to play for Cleveland. And of the Cleveland fans who are burning James' jerseys? "Maybe the ones burning my jersey were never LeBron fans anyway."

GQ.com: The Summer of LeBron

The former Israeli soldier did her first interview with Israeli Army Radio on Tuesday, saying she does not understand the media response to photos she posted to her Facebook page in which she is shown mugging alongside a set of blindfolded Palestinian prisoners.

"I still don't understand what's wrong," Abergil told the radio program. [The] pictures were taken in good will. There was no statement in them."

The photos were taken of Abergil and the prisoners last year. Since she is discharged, Israeli Defense Forces have no authority to respond. However, an IDF spokesman did call them "base and crude."

Haaretz.com: 'I don't see anything wrong with Facebook images of Palestinian detainees'

As a World Cup winner at just 19, the second teenager ŌĆō after Pel├® ŌĆō to score in a World Cup final, and the Ligutwitter.com/i/web/status/1ŌĆ”efbs49Z
cnni

4:00 am ET May 29, 2022 RETWEET
Fossils from a flying ŌĆ£Dragon of DeathŌĆØ have been discovered in Argentina, new research revealcnn.it/3wXPiRxTl6b
cnni

3:30 am ET May 29, 2022 RETWEET
Canned cocktails and bolder seltzers are set to dominate summer cnn.it/3MZV7n0
cnni

3:00 pm ET May 28, 2022 RETWEET
The world's largest bottle of whiskey, called "The Intrepid," has sold for about $1.4 million, according to the aucŌĆtwitter.com/i/web/status/1ŌĆ”Nk
cnni