As Pakistan flood recovery efforts continue, the temperatures and heat indices are soaring.

On Sunday the heat indices were once again in the mid 50s Celsius (130 Fahrenheit) across much of southern and central Pakistan. Although most of the country has seen little rain over the past few days, the incredibly high temperatures and humidity have made for difficult living conditions for the millions of people that have been displaced from their homes.

In Europe, a strong low pressure will move across the United Kingdom and towards Scandinavia on Monday. Severe weather warnings are in place for southern England, including London. Strong winds and up to 8 centimeters (3 inches) of rain will be possible, which could lead to flash flooding.

END_OF_DOCUMENT_TOKEN_TO_BE_REPLACED

"Additional strengthening is forecast during the next 48 hours, and Danielle could be near hurricane intensity by late Tuesday," forecasters said.

Tracking maps show the storm remaining out to sea and not nearing land through at least Friday. No coastal watches or warnings were in effect Sunday.

Thirty-three miners who were trapped in a Chilean mine more than two weeks ago are alive inside a shelter, Chilean President Sebastian Pinera said Sunday.

Rescuers retrieved an undated note from the mine that said that all of the miners were alive, he said. The note was tied to a probe that rescuers sent into the mine, authorities said.

The miners have been trapped since the mine caved in on August 5.

Gunmen intercepted a vehicle carrying salaries of Iraqi government employees in western Baghdad and made off with nearly $600,000, police officials told CNN on Sunday. The robbers attacked the vehicle a few hundred meters from a local bank, where it had been loaded with money, police said. Police officials said it appeared that the gunmen, who stole about 700 million Iraqi dinars, were monitoring the truck and may have had assistance from someone working at the bank or government employees. Iraqi security forces are investigating the incident. Police said no one was injured in the heist. 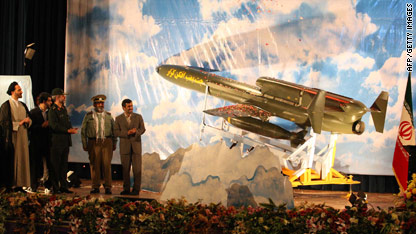 In February, Iran inaugurated the production line for two types of drones with bombing and reconnaissance capabilities, the semiofficial Fars news agency reported.

Iran has manufactured its own tanks, armored personnel carriers, missiles and fighter planes since 1992, according to Press TV. FULL STORY

New rules designed to protect credit card users from "unreasonable late payment and other penalty fees" come into force Sunday as a result of the Wall Street reform bill.

The rules block credit card companies from charging more than $25 for late payments except in extreme circumstances, prevent them from charging customers for not using their cards, and requires them to reconsider rate increases imposed since January 1, 2009, according to the Federal Reserve, which approved the regulations.

They are the final provisions of federal legislation that placed new restrictions on credit card interest rates and fees, completing the most comprehensive overhaul of the credit card industry in history.

The Fed's rules could result in lower interest rates for consumers. FULLÂ STORY

END_OF_DOCUMENT_TOKEN_TO_BE_REPLACED

Australian PM reaches out to independents

Australian Prime Minister Julia Gillard said Sunday that she was speaking with independent lawmakers in an effort to build a coalition government.