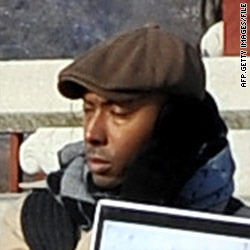 Former President Jimmy Carter is heading to North Korea hoping to secure Gomes' release from a North Korean prison. The 31-year-old from Massachusetts was sentenced to eight years of hard labor in April after illegally crossing the border from China into North Korea.

"I don't know why exactly he did it [entered North Korea] but he just, I'm sure he felt, that God was saying to him: 'Good can come out of this,' " a teacher and friend of Gomes told NPR in a report today.

Gomes tried to commit suicide last month, according to North Korea. Foreign Policy magazine reports that the State Department secretly sent a team to visit Gomes earlier this month but was not able to get him released.

Last year, former President Bill Clinton intervened in the case of two American journalists - Laura Ling and Euna Lee, who had allegedly crossed the border into North Korea - and they were released.

NPR: Why Did Aijalon Gomes Cross Into North Korea?

The Des Moines Register reports that she may be one of the first Republican National Committee members to say publicly that she believes President Obama is a Muslim.

Lehman first shared her view of President Obama on August 19 with a Twitter message in response to a Politico news article. "@politico you're funny," Lehman wrote. "They must pay you a lot to protect Obama. BTW he personally told the Muslims that he IS a Muslim. Read his lips."

On Monday, Lehman told the Register she based her opinion on a 2009 speech the President gave in Cairo, Egypt. The "New Beginnings" speech is viewed as Obama's first attempt to speak directly to the Muslim world following the George W. Bush administration.

"[It] just had a sense of embracing or aligning with the Muslims," Lehman said, "I don't know. It was unnecessary the stuff he said. That's the whole point."

A White House transcript shows President Obama does not say he is Muslim. The White House says the president is Christian.

WhiteHouse.gov: The President's Speech in Cairo: A New Beginning

The New Orleans-based radio talk-show host came to the national light in 2005 for his haunting interview with Ray Nagin, and remains the region's champion amid the fallout of BP.

Robinette is a Louisiana native and Vietnam veteran who was a television news anchor and environmental reporter in New Orleans long before he began hosting his radio program on WWL.

Today Robinette's focus is on "Bad and Pathetic," as he refers to BP. Using his environmental journalism background, Robinette often details how BP and the federal government have failed to respond to the disaster properly or be transparent about the cleanup.

"We're not really part of the United States," Robinette said in a recent interview with filmmaker Spike Lee. "We are like a rich Haiti."

CNN: Mayor to feds: 'Get off your asses'

The plus-sized model is the face of a new ad campaign from Chanel. As reported in numerous agencies, the campaign comes as a bit of a surprise given Karl Lagerfeld's tough words about curvy models.

The Daily Telegraph noted that perhaps is why the black-and-white photo-allegedly taken by Lagerfeld himself-only shows the 24-year-old Renn from the shoulders up, wearing a fur off her bare shoulders. In the background, a bare-chested man is gazing at her from a bed.

Regardless, it's not first time she's worked with Lagerfeld. Perhaps more impressive than any photo layout, she recently walked the runway for Chanel's resort collection in St. Tropez. It should be noted that Renn is a size 10 - not size 16 - arguably the real industry standard for American plus-sized women.

"It's not about body size, it's about talent and effort," Renn said. "I hope the industry sees this as an example of that."

On the day that the federal government fined Sea World $75,000 related in part to the death of trainer Dawn Brancheau, a woman who is a former safety director at Sea World came forward alleging a coverup.

Linda Simons, who worked at the park for two months before she was fired, said Sea World refused to let her tell OSHA that the park was ill-prepared for such a whale attack.

In an interview with ABC's "Good Morning America" yesterday, Simons said Sea World also required that all employees receive the "Tili-talk" about Tilikum, the whale that killed Brancheau. According to Simon, all employees who work with the whales were told, "If you go into the water with Tili, you will come out a corpse."

Simons started at Sea World the week before the incident and was present during the response to the incident. In the interview, she said she was fired two months later because Sea World did not want her to talk with OSHA investigators about the safety concerns she observed at the park.

Sea World responded by saying that Simons was fired for her poor performance during the Occupational Safety and Health Administration's investigation, a charge she denies. Her motive for speaking out? "I want to make sure that it is investigated and that the safety of the team members that remain is not jeopardized," Simons told Good Morning America. "I think that if they're put into that close proximity, it could easily happen again."

According to abcnews.com, Sea World blasted her accusations and said she "used the threat of negative publicity to seek a sizable monetary payment from SeaWorld in exchange for her not going public with these false allegations."

Tiger Woods withdraws from the PGA Championship after shooting his worst-ever score in the tournamentâ€twitter.com/i/web/status/1â€¦1y
cnni

7:00 pm ET May 21, 2022 RETWEET
The unidentified woman is seen emerging from behind photographers and quickly removing her dress before making herâ€twitter.com/i/web/status/1â€¦Ca
cnni

Tiger Woods withdraws from the PGA Championship after shooting his worst-ever score in the tournamentâ€twitter.com/i/web/status/1â€¦1y
cnni

7:00 pm ET May 21, 2022 RETWEET
The unidentified woman is seen emerging from behind photographers and quickly removing her dress before making herâ€twitter.com/i/web/status/1â€¦Ca
cnni