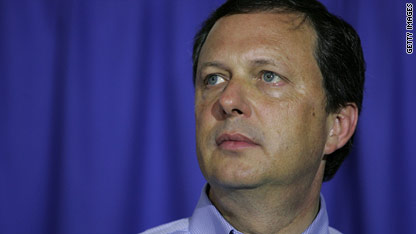 Michael Brown
The former FEMA director - of "You're doing a heckuva job, Brownie!" fame - will host his political radio talk show from New Orleans, Louisiana, on Wednesday and Thursday. Brown will go live from 9 p.m. to midnight EST on KOA in Denver. The return to New Orleans appears to be part of Brown's campaign to address history. In an interview Tuesday with ABC News, Brown said he no longer wanted to be the historical scapegoat of the George W. Bush administration. Brown was forced to resign from FEMA on September 5, 2005.

"I remember telling the [Bush] White House, 'I don't think you guys get it. This is going to be the big one that I've been fighting to get money for, that we've all been worried about,' " he told ABC News. " 'I think this could be it, and nobody seems to care.' " Brown believes that he was targeted because Bush was not going to fire Michael Chertoff, then only the second director of the newly established Department of Homeland Security.

Rick Scott
The "health care tycoon" won Florida's Republican gubernatorial nomination Tuesday, despite being involved in one of the largest Medicare fraud investigations in history.

Dr. Nega Beru and William Neuman
The Food and Drug Administration's director of food safety told New York Times reporter Neuman in the wake of a massive egg recall that U.S. regulators opted not to mandate a hen salmonella vaccine because there was not enough proof that it was effective. In a report Wednesday, Beru said: "We didn't believe that, based on the data we had, there was sufficient scientific evidence for us to require it." Beru added that egg producers were encouraged to vaccinate their hens if they thought it would help fight salmonella. A second FDA official, Nancy Bufano, supported Beru's comments to the Times, saying the proposed U.S. vaccine was viewed as different from the one British farmers were using.

Allen West
The retired U.S. Army lieutenant colonel - and Tea Party favorite - won the Republican nomination for Congress in Florida's 22nd District on Tuesday. He will now be in a rematch of his 2008 race against current U.S. Rep. Ron Klein, D-Boca Raton. West, of Plantation, has spent much of the past two years campaigning throughout Broward County, where only 36.8 percent are registered Republicans and 37.1 percent are Democrats. According to the Sun-Sentinel, West has raised tons of cash and will be a formidable challenge for Klein because the district is typically anti-incumbent.

Marcos Esparza Bofill
The former day trader and garage band enthusiast faces a $172 million bill from the IRS, reports the New York Daily News. On Tuesday, the Smoking Gun posted the lien against Esparza Bofill, a 20-something who lives in New York. Though the Daily News could not get Esparza Bofill on the record, an anonymous friend told the paper that his first response was: "Who's the IRS?" Esparza Bofill apparently lived in the U.S. in 2006 and traded for one year, the Daily News said. When he failed to file an income tax return, investigators tracked his every trade. Because he did not report losses or expenses, the IRS presumed a profit on Esparza Bofill's trades, which were $500 million. "He lives a very modest life," the friend told the paper. "So just to think that all of a sudden he owes $172 million is pretty ridiculous." An accountant told the paper that Esparza Bofill just needs to file a return to resolve the problem.