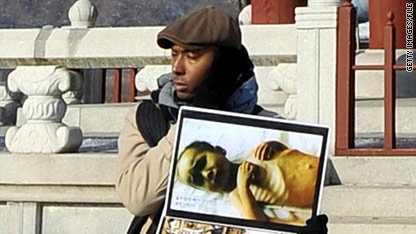 Gomes, seen here attending a rally in South Korea in January, was pardoned by North Korea, the Carter Center says.

Former U.S. President Jimmy Carter is leaving North Korea with a U.S. citizen who was imprisoned in the communist country after entering it illegally in January, according to the Carter Center in Atlanta, Georgia.

Aijalon Mahli Gomes, 31, of Boston, Massachusetts, was imprisoned in January and later sentenced to eight years of hard labor with a fine of about $600,000 for the crime of illegal entry into North Korea.

"At the request of President Carter, and for humanitarian purposes, Mr. Gomes was granted amnesty by the chairman of the National Defense Commission, Kim Jong-Il," the Carter Center said in a statement.

Carter arrived in North Korea on Wednesday to negotiate Gomes' release. Carter traveled in his capacity as a private citizen, senior administration officials told CNN earlier. They added Carter had contacted the administration of President Barack Obama about the mission.

Two American journalists - Laura Ling and Euna Lee, who had crossed the border into North Korea in March 2009 and were arrested and sentenced to 12 years hard labor - were released in August after an intervention by former U.S. President Bill Clinton.