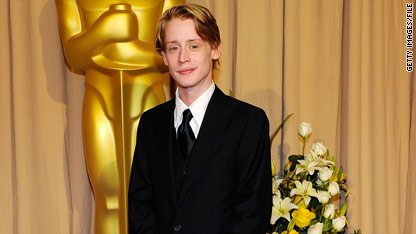 Web Pulse is feeling old. Macaulay Culkin turned 30 on Thursday, and even crueler, his skin looks a lot more baby-soft than ours (despite this weird beard). Oookaaay, so it's not really weird to have facial hair, but Macaulay was supposed to remain forever the character he played in the "Home Alone" movies. Everybody, palms to cheeks! Do the scream. You know you want to.

Let's all observe this high holiday by going to Netflix.com and watching "Home Alone" while we apply an expensive jar of wrinkle cream to our faces and cover the lights in tissue paper. Good thing there's news today that a new iPhone Netflix app allows you to stream television episodes and movies. Go ahead, download that sucker and pull up Macaulay doing the palms-to-cheeks-scream. You know you want to.

While your gorgeous mug is buried in your iPhone, why not check out  the latest sports headlines ... Hey, it's Tiger. (Remember that voice mail from last year?)

Tiger Woods has apparently gotten his game back after enduring what was believed to be one of the stinkiest stints in his professional career. He was in contention for the lead at Barclays tournament in New Jersey on Thursday, just a few days after his divorce from Elin Nordegren was formalized. Nordegren gave her first interview to People magazine this week, saying she had been "through hell" with her ex-husband after allegations surfaced of his extramarital trysts.

Nordegren is doing better than ever, thank you very much, no matter how much this lookalike on the green got attention today. Let's all take a cue from her and just accept that time marches on and we'll be just fine. Just fine. Really.