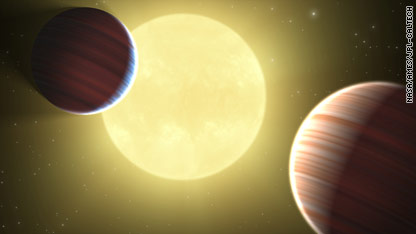 NASA has announced the discovery of two planets, slightly smaller than Saturn, orbiting the same star in the Milky Way, which have been discovered by the Kepler Space Telescope.

The two planets, known as Kepler 9B and 9C, have a clear gravitational interaction, according to NASA.

A third celestial body, has also been discovered. It's about 1.5 times the size of Earth, but it has not yet, been confirmed as a planet.

"The discovery incorporates seven months of observations of more than 156,000 stars as part of an ongoing search for Earth-sized planets outside our solar system," NASA said in a press release.

This is what it's like to be on a "cruise to nowhere." cnn.it/3CnGbcp https://t.co/aZNw7QaRTD
cnni

10:01 am ET September 18, 2021 RETWEET
During extreme heat events, a few city blocks can mean the difference between a manageable 80-degree afternoon or a‚Ätwitter.com/i/web/status/1‚Ä¶Gb
CNNweather

8:01 am ET September 18, 2021 RETWEET
Animals are getting larger beaks, legs and ears that allow them to better regulate their body temperatures as the p‚Ätwitter.com/i/web/status/1‚Ä¶dn
cnni