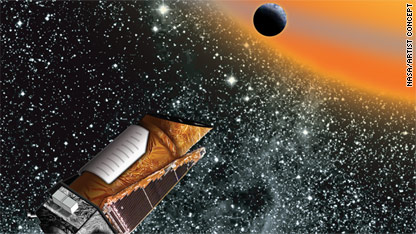 NASA scientists today will announce the discovery of what they call "an intriguing planetary system" as a result of searching by the Kepler space observatory. Kepler has beenÂ exploring space for possible Earth-like planets since the spring of 2009. FULL STORY

There are reports the third pilot also ejected before the collision between a one-seater and a two-seater jet, but the Air Force could not confirm that.

The crash took place during a training exercise northwest of the island of Crete, a press officer told CNN.

An investigation into the incident has begun.

END_OF_DOCUMENT_TOKEN_TO_BE_REPLACED

Anti-Muslim stabbing - A New York cab driver who was stabbed, allegedly after a passenger learned he was Muslim, will address the media Thursday afternoon at a news conference on the steps of City Hall. Shortly before the event, Mayor Michael Bloomberg is expected to meet with the driver, Ahmed Sharif, according to the mayor's schedule. At the news conference, Sharif will call for an end to anti-Muslim rhetoric that has followed the plan to build an Islamic cultural center two blocks from 9/11 ground zero.

Egg recall - Fresh eggs being produced by farms at the heart of a massive recall are making their way to consumers via facilities that pasteurize the eggs, process them and rid them of any possible salmonella. A half-billion eggs were recalled by Wright County Egg and Hillandale Farms during the salmonella scare.

Fresh eggs produced at those farms since the recall are being sold to "breaking plants" that break the eggshells, pasteurize the eggs and turn them into liquid or other form used in a variety of products, officials said.

END_OF_DOCUMENT_TOKEN_TO_BE_REPLACED

The number of first-time filers for unemployment insurance fell more than expected last week, according to a weekly government report released Thursday.

There were 473,000 initial jobless claims filed in the week ended Aug. 21, down 31,000 from an upwardly revised 504,000 the previous week, according to the Labor Department's weekly report.

Economists surveyed by Briefing.com were expecting new claims to fall to 485,000.

Claims had been stuck in the mid- to upper-400,000 range for about nine months, but spiked above 500,000 for the first time since November in last week's report.

END_OF_DOCUMENT_TOKEN_TO_BE_REPLACED

HIV singer verdictÂ - German pop star Nadja Benaissa faces a verdict today in a case which has seen her confess to sleeping with various partners without telling them she was HIV positive. The singer has already apologised for her actions saying that she had been â€śabsolutely careless.â€ť One of her former partners blames the singer for his now HIV positive status. Phil Black reports. Read the full story

South Africa struggle â€“ As the public sector strike in South Africa continues to claim victims, a father took to the radio airwaves in Johannesburg today to plead for help for his premature baby daughter. His girlfriend had been turned away from a public hospital where workers were striking and refusing to allow patients into the building. A private hospital responded to the manâ€™s pleas and hopefully the life of this innocent child can be saved. Read more on South Africa strikes

END_OF_DOCUMENT_TOKEN_TO_BE_REPLACED

A military test facility in southern Maryland lost control of an unmanned helicopter for about 20 minutes earlier in August before reestablishing its communications and returning it to the airfield it took off from, a U.S. Navy spokesman said.

END_OF_DOCUMENT_TOKEN_TO_BE_REPLACED

Dinosaurs, like us, got sick and injured. Until relatively recently, however, diagnosing multi-million-year-old diâ€twitter.com/i/web/status/1â€¦jC
cnni