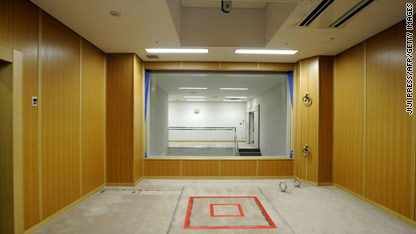 Red tape marks the trap door through which an inmate falls as he or she is hanged.

Japan, one of the few industrialized countries with the death penalty, showed one of its execution chambers to the media for the first time Friday.

Reporters were shown the death chamber at the Tokyo Detention Facility, one of seven used across the country, according to a report in the Mainichi Daily News.

Pressing a button in another room releases the trap door.

The unprecedented media access was ordered by Justice Minister Keiko Chiba, who after witnessing the deaths of two condemned prisoners last month, said she wanted to have a national debate on capital punishment in Japan, Mainchi reported. Chiba has previously spoken against the death penalty.

Execution in Japan is carried out by hanging.

The chamber showed to the media on Friday had no noose suspended from the ceiling but showed a trap door outlined in red. The condemned fall to a room below the execution chamber where their deaths are confirmed.

Reporters were not shown that room out of "consideration for the inmates' family and wardens," according to the Mainichi report.

A room where inmates are told they are about to be executed and can meet with a chaplain.

They did see other areas involved in the execution process, including the room where a button is pushed to release the trap door, a room where the condemned can get religious last rites or an entry room where inmates are told they are about to be executed.

The two men executed on July 28, Ogata Hidenori, 33, and Shinozawa Kazuo, 59, were the first put to death since the August 2009 elections in Japan, according to Amnesty International. The organization says 107 prisoners remain on death row in Japan.