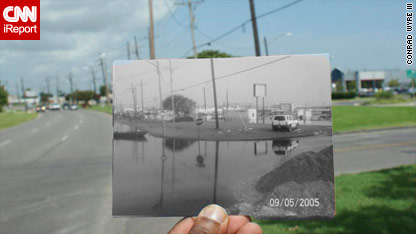 Less than a month before Hurricane Katrina devastated New Orleans, Cynthia Morrison decided to buy a house in the city. Five months after the storm, she returned and began to rebuild, as did so many who have given all to the city they love.

"I felt like New Orleans was a person that I had just let go, somebody that I loved, and I felt like I had to come back," Morrison said. "I really felt like I didn't have a choice. I couldn't see myself happy anywhere else." READ MORRISON'S ENTIRE STORY

On Sunday, the five-year anniversary of Hurricane Katrina's landfall, President Obama will travel to New Orleans to give a speech at Xavier University. READ FULL STORY ABOUT OBAMA'S TRIP

The president is likely to be shown how the city and areas ravaged by the storm have been given loving care over the years, and spots that remain unchanged. CNN's iReporters pitched in to create a visually stunning portrait of what hurricane damaged streets and homes looked like then and now. Ray Nagin, the controversial mayor of New Orleans when Katrina hit, also looks back, remarking to CNN "I have given my pound of flesh."

Many more stories to come today. Go to CNN.com for continuing coverage of the anniversary.