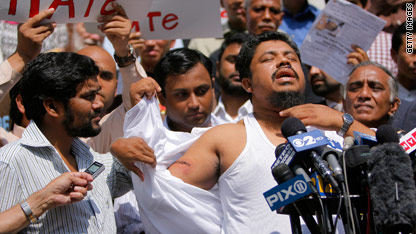 "Ahmed is a strong man, but mentally he has limits," said Bhairavi Desai of the New York Taxi Workers Alliance. "The trauma he's experienced will last for a long time."

Desai spent hours this weekend with Sharif. She said his most pressing worry is how he'll provide for his wife and four children - including a 10-month-old –without a job. Sharif is receiving 2/3 of his salary, about $30,000 a year, in workers' compensation. Union members do not get health insurance or disability payments, Desai said.

"My guess is that he'll be unable to work for at least four months," Desai said. "He can't even pick up his baby because of the wounds to his arms. He can't turn his neck."