Cousteau: Slow and steady will win in Gulf 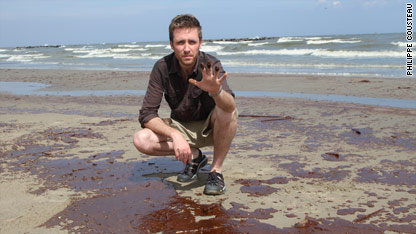 Philippe Cousteau on a beach in the Gulf of Mexico, surrounded by oil.

It has been an interesting week to say the least regarding the Gulf oil disaster. I watched the headlines respond to the decidedly rosy perspective of the feds and BP that only last week claimed that the worst was behind us and that most of the oil has been cleaned up or naturally dissipated.

As many of us warned, those predictions were premature at best, and this week, new science is emerging that suggests this is only the end of the beginning. The whole debacle reminds me of the Aesop's Fable of the tortoise and the hare. You know, the one where the arrogant hare who can easily outrun the tortoise ends up losing the race because, confident he will outrun the tortoise, he takes a nap, oversleeps and loses.

Attributed to a Greek slave who lived in the mid-sixth century BC in ancient Greece, this fable is one of hundreds that have stood the test of time. They have been translated throughout the millennia into countless languages and still hold true today.

The challenge with nature and science is that they don't fit into a neat little box and defy our short attention spans and our eagerness to move on. While it took industry and the government months to figure out how much oil was initially spilling from the well, it took only weeks to state that 75% of the oil had been cleaned up. Now, several university studies are refuting that data, and even government scientists are admitting that the oil is taking longer to dissolve than they had thought. One in particular, from a team at Georgia Sea Grant and the University of Georgia, claims the opposite: that in fact, up to 70% of the oil may still remain in the Gulf; much of it deep below the surface, where it can still wreak unknown havoc on the ecosystem for years to come.

In addition, Woods Hole Oceanographic Institution has confirmed the presence of toxic oil plumes beneath the surface. While the plumes may not be visible to the naked eye, oil persists in the water and is still toxic to fish eggs and larvae, as well as plankton and other organisms that are critical to the health of the ecosystem.

The bottom line is that in their eagerness to swiftly put this issue behind them, government and industries didn't use good sense, and they forgot the lesson that this spill should have taught us: Hare-like recklessness and arrogance, the kind that put money before safety and precaution, whittled away at "pesky" regulations and ignored science as too slow and burdensome. That laissez faire attitude is what got us into this mess in the first place.

In the end, it still comes down to the three R's I wrote about weeks ago: Regulation must be Reformed so the environment comes first; Restoration must be funded for the short and long term; and Research - and with it, education - must be invested in so that future generations are armed with the knowledge to never make these mistakes again.

Not long after the spill happened, I was speaking to a group of elementary school students in Kentucky. After my presentation, the audience questions quickly turned the oil spill. The students were all horrified and upset by what was happening in the Gulf, and at the end of the Q/A, I asked them a question: "Who is going to have to clean up this mess?"

All of them raised their hands and said in somewhat subdued unison, "We will."

Five- and 6-year-old children knew that this will take years to clean up. Why is it that so many adults can't seem to understand that? We must not lose our patience and allow special interests to hastily and recklessly charge forward while our better judgment sleeps.

This oil spill, as with all environmental disasters, will be with us for a long time to come, and our response must be patient, methodical and prudent. Much has changed in the 2,600 or so years since Aesop first wrote that fable, but the wisdom of it hasn't: Slow and steady always wins the race.