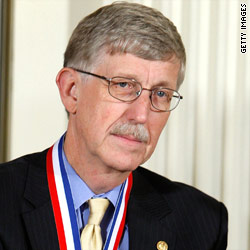 The director of the National Institutes of Health - an evangelical Christian - told The New Yorker he was stunned by a federal judge's decision last week to halt federal funding for research on embryonic stem cells.

In a profile released Monday, author Peter Boyer writes that Collins has been able to balance science and faith.

His appointment to the job by President Obama had worried some scientists, already concerned by what one called the "theocracy" of the George W. Bush presidency.

"A year later, Obama's appointment of Collins seemed an inspired choice," Boyer writes. "The President had found not only a man who reflected his own view of the harmony between science and faith but an evangelical Christian who hoped that the government’s expansion of embryonic-stem-cell research might bring the culture war over science to a quiet end."
The court order last week changed that. Collins, who also helped map the human genome, spent part of last week calling researchers around the country, telling some of them their projects would have to shut down, Boyer reports.

"Patients and their families are counting on us to do everything in our power, ethically and responsibly, to learn how to transform these cells into entirely new therapies," he explained. "It's time to accelerate human-embryonic-stem-cell research, not throw on the brakes."

The New Yorker: The covenant

The writer, who won the 2007 Pulitzer Prize for poetry, is gaining praise for a critically acclaimed memoir she's just released. "Beyond Katrina: A Meditation of the Mississippi Gulf Coast" is an ode to North Gulfport, Mississippi, where Trethewey's family has lived for three generations. The area is considered one of the most blighted regions along the Mississippi coast, the author said in an essay released last week in The New York Times.

North Gulfport is a city filled with "For Sale" signs, condemned structures, weed-filled lots, and a few neat houses "hunkered against the neighborhood's demise," Trethewey wrote.

While she has now relocated to Atlanta, Georgia, where she is a professor at Emory University, her brother Joe and cousin Tammy remain in the area.

Joe tends to the yard outside their grandmother's home, Trethewey wrote, because he cannot afford to fix up the house that is falling in on itself. Blue hydrangeas bloom, thanks to Joe's care. Such a façade keeps the city from condemning the building, she explained, and helps Joe hold onto a piece of the pre-Katrina past.

"Before Katrina, change was natural," Trethewey wrote. "In the post-Katrina landscape, all change is haunted by the devastation of the storm, and thus inseparable from it."

The New York Times: Our loss, through the eye of the storm

NPR: Moving 'Beyond Katrina' through poetry and prose

The former fireman and paramedic, who never got a college degree, leads the Federal Emergency Management Agency. Craig Fugate told The New York Times Magazine, in a profile published Sunday, that he knows he's not typical Obama "Ivy League stock."

"I wouldn't hold me up as an example of what people can do without a degree," he said. "I must have fallen through the cracks."

Fugate was orphaned by age 15, and raised by his grandmother.

"Everybody likes to attribute [my emergency management skills] to something in my background, something in my family," he told the Times. "I'm more Zen-like. I don't know if there's a reason."

Raised in Alachua, Florida, Fugate was appointed as Florida's head of emergency management services in 2001 by then-Gov. Jeb Bush. He became FEMA administrator in 2009.

What advice does he offer in the way of preparing for the worst? Stock up on water, peanut butter, and cash, and don't get overwhelmed.

"You have to start defining what you are trying to achieve, what outcome you need to get to be stable and start planning back from that," he said.