Union: More than $30K pours in for stabbed cabbie 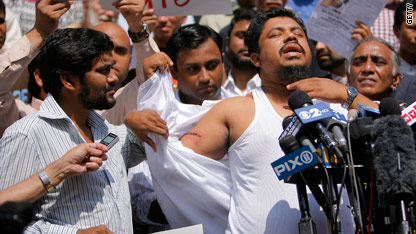 More than $30,000 was donated overnight to help a Muslim cab driver stabbed by a passenger last week, a taxi union rep said.

Since Sunday evening, more than $30,000 in donations poured in from people across the world for the New York cab driver who was stabbed by a passenger last week, according to a representative of a New York taxi drivers' union. See how to give here.

Last Tuesday, Sharif's passenger 21-year-old Michael Enright allegedly asked Sharif if he was a Muslim, officials have said. Enright then reached through the cab's partition and slashed Sharif's neck and forearms, police said. Sharif struggled from his car and flagged down a police officer who arrested Enright, the union spokesperson said.

The taxi drivers' union publicly implored people last Friday to donate money to the driver who is expected to be out of work for four months. His family's sole breadwinner with an annual salary of about $30,000, Sharif has four children, a 10-month-old, 5, 9 and 11-year-old. His wife stays at home to care for their infant and cannot work, said union spokesperson Bhairavi Desai.

Sharif is receiving 2/3 of his salary in workers' compensation. Union members do not get health insurance or disability payments, Desai said.

"This outpouring is the most joyous thing his family could ever hope for," she said. "This will help them survive."