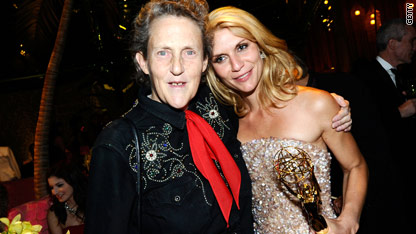 Temple Grandin with the actress who played her, Claire Danes.

Temple Grandin is adorable. The woman who inspired the namesake movie which swept the Emmys Sunday night was so caught up in the jubilation of the evening that she asked her mother to stand up in the audience. Who gets to do that? Answer: The amazing Temple Grandin. Actress Claire Danes got her first Emmy for playing the animal science professor who has gained worldwide renown for educating people about what it's like to be autistic.

Social networking sites were buzzing about the awards show, from January Jones' dress to a vampire in gladiator gear. Nobody picked on those Glee kids, but sometimes it's entertaining for evil to trump good, so here's to you Jane Lynch. In more shocking Emmy news, Mad Men won again.

Speaking of a convincing pitch, a television station in Sacramento, California, has aired the first advertisement for legal marijuana. An ad for pot was reportedly rejected by other stations.

My goodness, isn't this blog just going to hell. But why not go all the way there if people are talking about it? There's a new "scary" movie out with a revamped twist of pea-soup-head-spinning called "The Last Exorcism." Like all demon house-cleanings, this film has a surprise ending and it's upsetting a lot of people. Glenn Beck appears and tells the possessed child to "return to God." We are kidding - of course. Here's the big reveal, if you don't plan on seeing the flick. Or better idea, go see the movie and hide a small container of pea soup in your purse and at just the right time, when none of your friends are looking, slurp some, make gurgly sounds and spit it out in your popcorn! That's how we turn bad movie experiences around.

Oh, you wanna go lower, eh? Fine. We'll take your double-dog dare. TMZ has published what it says is the police report of Paris Hilton's arrest for possession of controlled substances.