As Iraq combat mission ends, nation asks: Was it worth it? 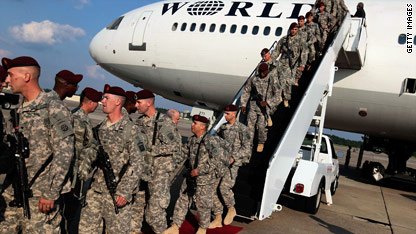 Paratroopers return from their year-long tour in Iraq.

When President Obama sits down in the Oval Office on Tuesday night to address the nation about today's official drawdown in Iraq, he'll be speaking about the end of the U.S. combat phase and marking a new chapter in a war that has been controversial for seven years.

The combat mission in Iraq has been marked by many key events: It began with a declaration of weapons of mass destruction and was followed by a lengthy justification from the Bush administration, the capturing and execution of Saddam Hussein and a wave of sectarian violence.

The war so far has killed more than 4,400 U.S. troops among the thousands of casualties.

When Obama delivers his address, he won't say "mission accomplished," a top aide says. Instead, Obama will have a "change of mission" moment. Watch Obama live 8 ET: Web | TV | iPhone

As Obama prepares for his delivery, and the GOP prepares its own assessment, Iraqi Prime Minister Nuri al-Maliki held a national address of his own Tuesday, during which he proclaimed Iraq as "sovereign and independent."

As the milestone nears - officially at 5 p.m. - politicians, columnists, editorial boards, soldiers and everyday citizens are seemingly taking the opportunity to ask one question that perhaps has no apparent answer: Was it all worth it?

Peter Bergen, CNN's national security analyst, lays out "what was lost and what it cost" for the U.S. to go to war with Iraq.

"There is no question that the United States liberated Iraqis from Saddam Hussein's demonic tyranny, but that argument was not what persuaded Americans that a preemptive war against the Iraqi dictator was in their best interests ...

"In short, the jury is still out on whether the Iraq War was the United States' most spectacular foreign policy blunder of the past several decades, or if, out of the wreckage, something resembling a coherent Iraq will eventually arise."

The Washington Post's Eugene Robinson wrote that these days, wars rarely are won - but instead end in a "fog of ambiguity."

"Now that the Iraq war is over - for U.S. combat troops, at least - only one thing is clear about the outcome: We didn't win. We didn't lose, either, in the sense of being defeated. But wars no longer end with surrender ceremonies and ticker-tape parades. They end in a fog of ambiguity, and it's easier to discern what's been sacrificed than what's been gained. So it is after seven years of fighting in Iraq, and so it will be after at least 10 years - probably more, before we're done - in Afghanistan."

Ryan C. Crocker, former U.S. Ambassador to Iraq, concurred, writing in The Washington Post that he, too, believes this "milestone" doesn't mean things are over yet, let alone that we can properly assess what happened.

"The exit of combat troops does not end the post-1990, non-polar disorder that Hussein's invasion launched. He illustrated an international paradigm shift; he did not create it. Nor does it mean that Iraq is now "over." All of the momentous events of the past 7 1/2 years notwithstanding, Iraq is still at the beginning of its new story, with a future that will be defined by events that have not yet taken place. We have a vital strategic interest in the shape of that future: a stable, pluralistic Iraq in close association with the United States and the West can fundamentally reshape the map of the Middle East. An Iraq that descends into chaos or a new autocracy will threaten the security of the region and the United States."

James Phillips and Lisa Curtis of the conservative Heritage Foundation said the war is "not yet won" and the country remains plagued by "a low-grade insurgency, chronic terrorism, and simmering sectarian tensions."

"President Obama’s televised speech on Iraq will mark the “official” end of U.S. combat operations in Iraq and the transition to an “advise and assist” mission. The President undoubtedly hopes to assure voters ahead of the November elections that he is winding down the war. The irony is that current progress in Iraq was enabled by the Bush Administration’s surge policy, which President Obama, Vice President Joseph Biden, Secretary of State Hillary Clinton, and many members of this Administration opposed.

But the President should now make every effort to avoid squandering the hard-won security gains of the surge by withdrawing too many troops too fast. Iraq still needs substantial U.S. military, diplomatic, and political support to defeat various insurgent groups, stave off a possible return to civil war, and contain Iran’s expanding influence."

The New York Times columnist David Brooks argued there will be many successes (economic and social) that Obama will be able to tout in his address - but he'll have to do it carefully - "balancing pride with caution."

"In short, there has been substantial progress on the things development efforts can touch most directly: economic growth, basic security, and political and legal institutions. After the disaster of the first few years, nation building, much derided, has been a success. When President Obama speaks to the country on Iraq, he’ll be able to point to a large national project that has contributed to measurable, positive results.

Of course, to be honest, he’ll also have to say how fragile and incomplete this success is. Iraqi material conditions are better, but the Iraqi mind has not caught up with the Iraqi opportunity."

Rep. Mike Pence (R-Indiana), head of the House Republican Conference, wrote in a guest column for The Washington Times that Obama should give credit where it's due: to those who despite negative press stood for the surge and what the war meant. He further said Obama and certain Democratic officials should not hog the glory because they refused to support either endeavor.

"The Obama administration is attempting to rewrite history by taking singular credit for our accomplishments in Iraq. Vice President Joseph R. Biden Jr. recently claimed it was President Obama who laid out the plan for a responsible end of the war in Iraq. But that's not the whole story.

As we mark this milestone, let us remember the real history of Operation Iraqi Freedom and give credit where credit is due – to the American service members, their families and a commander in chief who would not accept defeat in the face of withering criticism at home and abroad."

For those on the battlefield, the question is also real. Were their sacrifices worth it? Does this milestone mean people will lose sight of what needs to be done in Iraq? Those are some of the questions The Baltimore Sun posed to soldiers, including Army Spc. Craig Yingling, who served in Operation Iraqi Freedom and shared his thoughts.

"When we perform missions, we still wear full combat gear and go out armed? We still take incoming fire and the threat is still VERY REAL. Soldiers are still risking their lives on a daily basis.

I had an opportunity to talk to a few people this [past] weekend who were very [grateful] for my service and extremely happy that it’s over. It’s not over — we are still there and will remain there at least till the end of next year. That is the deadline for all troops: December 2011."

The water level in Lake Mead — the nation's largest reservoir — dropped below 1,050 feet elevation for the first twitter.com/i/web/status/1…J9Bkv8
CNNweather

9:17 pm ET May 24, 2022 RETWEET
Biden asks: “Where is our backbone?” after 18 children and a teacher are shot dead at a Texas school. In live addtwitter.com/i/web/status/1…EFcJg6
susancandiotti

The water level in Lake Mead — the nation's largest reservoir — dropped below 1,050 feet elevation for the first twitter.com/i/web/status/1…J9Bkv8
CNNweather

9:17 pm ET May 24, 2022 RETWEET
Biden asks: “Where is our backbone?” after 18 children and a teacher are shot dead at a Texas school. In live addtwitter.com/i/web/status/1…EFcJg6
susancandiotti