Obama to U.S.: 'Operation Iraqi Freedom is over' 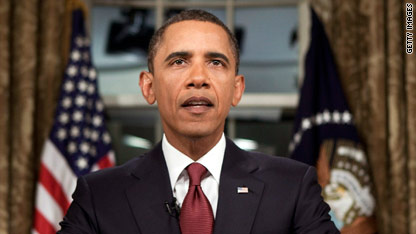 (CNN) - President Obama declared that "the American combat mission in Iraq has ended" in his prime-time address Tuesday.

"Operation Iraqi Freedom is over, and the Iraqi people now have lead responsibility for the security of their country," he said.

The mission officially drew to a close at 5 p.m. Tuesday. Obama said the winding down of the war in Iraq means it's time for citizens to unite and build a better life for all Americans.

"Our most urgent task is to restore our economy and put the millions of Americans who have lost their jobs back to work," he said in his nationwide address from the Oval Office.

"... This will be difficult. But in the days to come, it must be our central mission as a people and my central responsibility as president."

Despite the controversies surrounding the Tokyo Olympic Games, there are hardcore Olympic super fans who can't waitâ€twitter.com/i/web/status/1â€¦Fm
cnni

2:31 am ET June 23, 2021 RETWEET
A scuba diver in Michigan found a 95-year-old message in a bottle at the bottom of the Cheboygan River. After postiâ€twitter.com/i/web/status/1â€¦fw
cnni

1:01 am ET June 23, 2021 RETWEET
While overseas spectators were barred from coming to the Games earlier in March, just this week, Tokyo 2020 organizâ€twitter.com/i/web/status/1â€¦yl
cnni