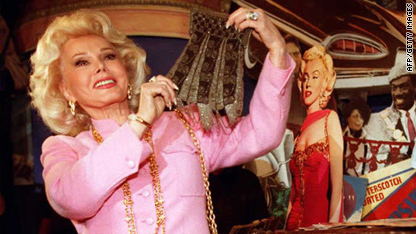 Actress Zsa Zsa Gabor was rushed to the hospital after her husband found her "unresponsive" Tuesday morning, her publicist told CNN.

She was hospitalized for several days earlier this month for complications relating to the surgery, he said.

Her husband, Prince Frederic Von Anhalt, was "very agitated" after calling for an ambulance Tuesday morning, he said.

Gabor had returned home from the hospital two weeks ago because she "wants to spend her final days at her home," Blanchette said at the time.

She spent three weeks in the hospital after breaking her hip in a fall from her bed on July 17.

She has been frail and "pretty much confined to a wheelchair" since a 2002 car accident, said Von Anhalt. The crash happened when the car in which she was riding with her hairdresser slammed into a light pole on Sunset Boulevard in Los Angeles.

The glamorous Hungarian-born actress, the second of the three celebrated Gabor sisters, is most famous for her many marriages. Among her husbands was Oscar-winning actor George Sanders.

Vaccine advisers to the US Food and Drug Administration will start meeting early Friday to discuss whether Americanâ€twitter.com/i/web/status/1â€¦K5
cnni