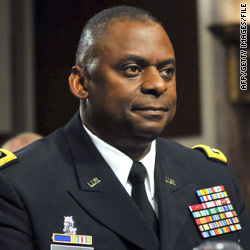 Austin will assume command of Operation New Dawn, overseeing the nearly 50,000 U.S. troops remaining in Iraq after the official handover. Austin, who was the first African-American to be a commander at Fort Bragg, North Carolina, relieves Gen. Ray Odierno, who commanded Operation Iraqi Freedom for the past four years.

He is a tall man who has kept a low profile, according to a New York Times profile this spring. He's served two tours in Iraq, during the time of highly publicized military campaigns in Basra and in Baghdad's Sadr City. He also commanded the 10th Mountain Division in Afghanistan, and was awarded the Silver Star for his combat duties, the Times said.

Austin has the geopolitical wherewithal to engage the Iraqi people, sources told the Times. In 2009, Austin succeeded Gen. Stanley McChrystal as director of the Joint Staff, where he worked directly for Adm. Mike Mullen, the Joint Chiefs chairman.

On the same day that the president delivers a critical Oval Office address on Iraq, the House minority leader addresses the American Legion's national convention in Milwaukee, Wisconsin. According to The New York Times, he will "remind thousands of veterans" attending the convention "that Mr. Obama and other Democrats had opposed the military escalation credited with gains in Iraq."

Boehner got his start sweeping floors in a bar, and he met his wife while working as a janitor. Should the House return to the Republicans in November, he could be the next speaker of the House.

The 83-year-old "Phantom" of Atlanta's Fox Theatre feels he's being forced out of the home he's had for the past 30 years. Patten is a retired technical director of the 1920s landmark, and has lived in a 3,640-square-foot apartment above the theater rent free since 1979, according to the Atlanta Journal-Constitution.

Patten reconditioned the ornate theater's pipe organ in the 1960s and has maintained it since. In 1974, he helped form Atlanta Landmarks, a nonprofit that kept the theater from being demolished. In 1996, he was credited with saving the theater on Peachtree Street when a fire erupted. He has renovated the living space over the past 30 years, filling it with antiques and a customized sound system. He also has a private sitting area that allows him to watch any of the productions at any time.

Patten is a diabetic who was recently hospitalized for about 20 days because of health issues, the paper reported. So the Fox Theatre board proposed that he sign a new lease allowing for rent-free living until he required round-the-clock nursing care. "He could live there for as long as he's able," board spokeswoman Kristen Delaney said, "but we are not equipped to handle 24-7 elder care. We're a theater, first and foremost."

"I'm out. I'm ready to leave now," Patten told reporters when he heard he'd need to sign a new lease. Added his sister Patti Patten-Carlen: "How could anybody do that to somebody who's 83?"

‚ÄòPhantom of the Fox' may lose historic theater apartment

Phantom of the Fox' is an organ enthusiast and preservationist

An all-boys public school, whose roots stem from the Million Man March and has gone on to inspire 40 other similar schools nationwide, will open two campuses in New York City next week, including a $50 million facility in the Bronx. David Banks, president of The Eagle Academy Foundation, told CNN that the foundation has funded the opening of the two all-boys public schools on September 8. The Eagle Academy for Young Men will house a school in Queens, while the Bronx location will start its school year at a new facility that includes wireless internet, computers in each classroom, and even a recording studio, Banks said.

The Eagle Academies began as a mission to end the "school-to-prison pipeline" phenomenon that plagues many inner cities. With the help of another organization, 100 Black Men Inc., the Eagle Academy concept has been embraced by Mayor Michael Bloomberg and former New York Sen. Hillary Clinton. Banks designed the schools to promote male role models for young men. The hip-hop generation is a fatherless one, he told CNN. "We keep these kids engaged and off the street." Banks also knows the role parental involvement can play in a child's education. The school offers Saturday meetings to help parents deal with difficult schedules.

"We have mothers that come in and say 'you have to save my baby ... ' Banks said. "They can tell you about the hope and redemption that takes place at Eagle Academy."

More surveillance is needed of a new virus detected in dozens of people in eastern China that may not cause the nex‚Ätwitter.com/i/web/status/1‚Ä¶JI
cnni

12:01 am ET August 13, 2022 RETWEET
PowerWash Simulator is a video game about the good, clean fun of tidying up filthy things cnn.it/3SMJrY0 https://t.co/EXNACud9sP
cnni

11:01 pm ET August 12, 2022 RETWEET
More than 31,000 cases of monkeypox have been reported globally since January 1. Most people have recovered at home‚Ätwitter.com/i/web/status/1‚Ä¶Yo
cnni

‚ÄúChurch leaders disclosed that multiple Southern Baptist entities were under investigation and said that all wouldtwitter.com/i/web/status/1‚Ä¶n7Ow
susancandiotti

2:36 pm ET August 12, 2022 RETWEET
And now, in a Thursday night statement, he states he‚Äôs ‚ÄúENCOURAGING‚Äù release of the documents (as he could havetwitter.com/i/web/status/1‚Ä¶70aPBkY2
susancandiotti

The House has passed Democrats' sweeping health care and climate bill, which now goes to President Biden to be sign‚Ätwitter.com/i/web/status/1‚Ä¶QK
cnnbrk

3:49 pm ET August 12, 2022 RETWEET
One week after a fiery car crash, Anne Heche is "brain dead" but remains on life support, according to a statement‚Ätwitter.com/i/web/status/1‚Ä¶Mk
cnnbrk

3:15 pm ET August 12, 2022 RETWEET
The FBI recovered 11 sets of classified documents from its search of Mar-a-Lago earlier this week, including some a‚Ätwitter.com/i/web/status/1‚Ä¶tO
cnnbrk