The bulls are back on Wall Street. After a bearish August, stocks roared into September with a major rally Wednesday, as investors cheered signs of strength in the manufacturing sector.

END_OF_DOCUMENT_TOKEN_TO_BE_REPLACED

Earl back to Category 4; East Coast nervous: Hurricane warnings and watches stretched from North Carolina to Delaware and covered parts of Massachusetts on Wednesday as forecasters upgraded Hurricane Earl to a Category 4 storm and warned it will be approaching the East Coast by late Thursday.

Suspect in Discovery standoff is dead: Three hostages were rescued from the headquarters of the Discovery Channel in Silver Spring, Maryland, Wednesday afternoon after police shot and killed the man who was holding them, officials said.

Actress tearfully denies sham marriage: Closing arguments were set for Wednesday in the trial of Mexican soap opera actress Fernanda Romero on federal charges that her marriage was an illegal sham intended only to earn her a U.S. work permit.

Apple overhauls iPods: A reworked line of iPods and a new, drastically cheaper version of Apple TV are on the way.

Bitter rivals Ohio State and Michigan won't be in the same division when the Big Ten reorganizes its football setup in 2011. But they still will play each other every year and, if they're both good enough, possibly even twice.

The Big Ten on Wednesday announced the alignments of its two new football divisions, which will debut when the conference expands to 12 schools by adding Nebraska next year. The introduction of the divisions - the conference currently has no such thing - will allow for a new conference championship game akin to those played in some other big conferences, with the winner of each division battling for the title.

The alignments for the new divisions, which have yet to be named, are as follows:
END_OF_DOCUMENT_TOKEN_TO_BE_REPLACED 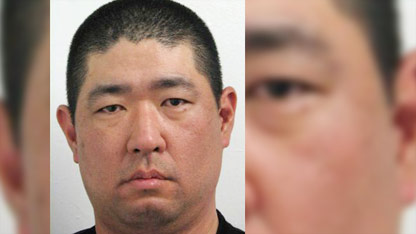 END_OF_DOCUMENT_TOKEN_TO_BE_REPLACED

Toner said Imam Feisal Abdul Rauf will leave the region on Thursday and be back in New York the same day.

This was his fourth outreach trip overseas for the State Department. In 2007, he made two similar trips to the Middle East for the Bush administration, and in January this year he traveled to Egypt, his first trip or the Obama administration.

Men arrested on terror charges have been freed

"Given that no evidence has been found to support the initial accusation, there is no reason to hold the men any longer and they are no longer considered suspects," Dutch prosecutors said on their website.

The men were arrested Monday when items in their luggage prompted concerns they were doing a "dry run" for a terror attack. 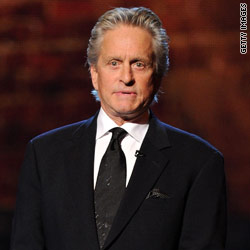 The Oscar-winning actor and producer surprised viewers last night when he told "Late Show" host David Letterman that he has Stage 4 throat cancer. Looking thinner after finishing his first week of radiation and chemotherapy, Michael Douglas said he'd felt symptoms and sought medical attention earlier this summer, but the disease was not diagnosed until three weeks ago.

"No." Douglas said with a humorous beat. The good news, he said, was that the disease has not spread and that he has an 80 percent chance of recovery. Also not apparently affected yet: Douglas' trademark voice. "This is just the first week," Douglas admitted, "so the progression goes down. ... The radiation continues to burn your mouth. ... You can't take solids."

END_OF_DOCUMENT_TOKEN_TO_BE_REPLACED 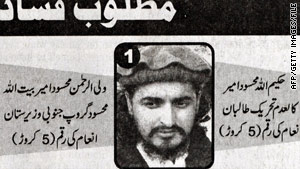 An announcement in a Pakistani newspaper in 2009 for 'The Names of Most Wanted Terrorists' included Mehsud.

Hakimullah Mehsud, a key leader of the Pakistani Taliban, has been charged for his alleged involvement in the murder of seven U.S. citizens at an American military base in Afghanistan in 2009, according to the U.S. Justice Department.

A $5 million reward is being offered for information leading to the capture of Mehsud and another top Pakistani Taliban leader, Wali Ur Rehman, U.S. officials announced Wednesday.

The group - which was declared a terrorist organization by the United States - is believed to be responsible for terrorist acts, including the December 30, 2009, suicide attack on a CIA base in Afghanistan and the attempted Times Square bombing earlier this year.

END_OF_DOCUMENT_TOKEN_TO_BE_REPLACED 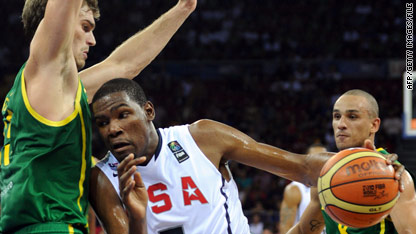 Kevin Durant and team USA will take on Iran today in the FIBA World Basketball Championships.

In an attempt to be the Notre Dame of the west, Brigham Young is leaving the Mountain West Conference and taking its football program with it.

With big paydays and nationally televised games widening their eyes, BYU announced Tuesday it would leave the MWC in 2011-12 and join the West Coast Conference with one glaring exception. The school’s football team is going independent.

The move should increase BYU’s (43-9 over its last four seasons) exposure and bank account, but could complicate filling out a schedule every year. In addition to BYU holding a Wednesday news conference to explain its decision, here’s what else is going on in the world of sports (all times Eastern):

– FIBA World Basketball Championships: U.S. versus Iran (noon, ESPN)
After squeaking past Brazil with a 70-68 victory on Sunday, the U.S. is back in action today against an opponent as contrasting as the two countries’ political views. Kevin Durant led Team USA last time out with 27 points and 10 rebounds. SI.com is live blogging all the action.

END_OF_DOCUMENT_TOKEN_TO_BE_REPLACED

Hurricane Earl made its presence known Wednesday despite being hundreds of miles from the East Coast of the U.S., menacing swimmers with dangerous rip currents and large swells as forecasters expanded a hurricane watch northward from North Carolina into coastal Virginia.

A new video by trapped miners in Chile shows them in good spirits, with shaved faces, wearing new clothes and sleeping on camp beds.

The nearly 23-minute video, made available to families Tuesday, was shown to reporters Wednesday.

In it, the some of the 33 miners are seen wearing red T-shirts, blue shorts with white stripes and calf-length rubber boots.

Hurricane Earl made its presence known Wednesday despite being hundreds of miles from the East Coast of the U.S., menacing swimmers with dangerous rip currents and large swells as forecasters expanded a hurricane watch northward from North Carolina into coastal Virginia. Mandatory evacuation orders were issued for Ocracoke Island, on North Carolina's Outer Banks, and Cape Lookout National Seashore.

END_OF_DOCUMENT_TOKEN_TO_BE_REPLACED

Three people died and dozens were injured in riots over increases in the price of bread, water, energy and other critical goods in Mozambique, the southern African nation's official news agency reported Wednesday.

The violence took place in the cities of Maputo and Matola, with the deaths occurring on the outskirts of Maputo, the Mozambique News Agency reported.

Bank and electricity company offices were vandalized, and food warehouses belonging to the Sasseka and Delta Trading distribution companies were looted, the report said. 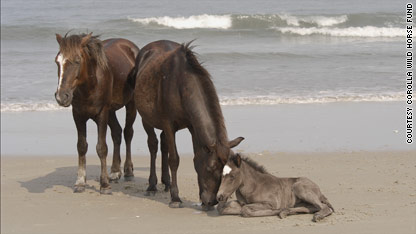 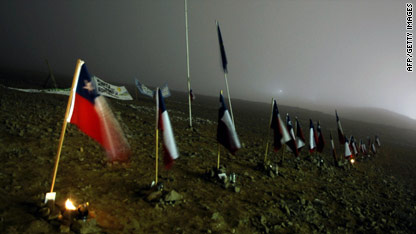 Chilean national flags wave outside the San Jose mine, where 33 men are trapped.

Chile miner video - Officials are expected to distribute on Wednesday copies of a 25-minute video that the miners, who have been trapped underground for more than three weeks, sent for their relatives. The video, sent Tuesday, held another round of greetings from the 33 men, family members who had seen it told CNN.

After a private screening held in the tents that comprise Camp Hope at the entrance to the mine, some relatives emerged solemn-faced; others were teary, yet most appeared happy. All the family members said the miners appeared to be in much better condition, much cleaner and much better organized than they had appeared during the first video, which was sent up last Thursday.

Apple event - In the tech world, it's become an annual rite of fall. Apple CEO Steve Jobs and company have, for the past five years, used September as the time to announce new products and services among the company's music offerings. Last year, Jobs - making his first public appearance since returning to work after a liver transplant - unveiled some changes to the iPod lineup, including new Nanos with video cameras, and announced slashed prices on the portable music players.

CNN's Doug Gross takes a look at what will - and won't - be unveiled today. And by the way, for the first time, Apple will be livestreaming the event on its Apple.com website. But if you've got a PC and don't have an Apple device (iPad, iPhone, iMac, iEtc), don't bother - only Apple users can see it. You will, however, be able to see a tape-delayed version of the announcement on CNN.com here.

END_OF_DOCUMENT_TOKEN_TO_BE_REPLACED

An update from the CNN newsdesk in London on some of the stories we're following on Wednesday:

Spain prostitution - A trafficking ring responsible for bringing 60 to 80 young male prostitutes to Spain from South America has been dismantled by Spanish police. The men were allegedly plied with drugs and Viagra and forced to work around the clock after the ring bombarded them with death threats. Read the full story

Cricket cheating claims - A meeting between the Pakistan cricket players at the centre of an alleged cheating storm and the country’s top cricket officials due to have taken place in London has been postponed until Thursday. In the meantime, the national team continues to practice in Taunton, UK ahead of a match against Somerset Cricket Club.