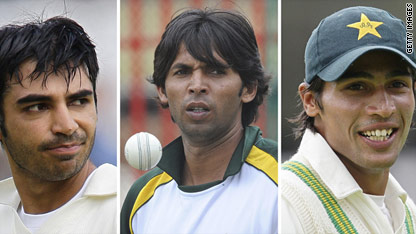 Salman Butt, left, Mohammad Asif, center, and Mohammad Amir are at the center of the allegations.

Cricket scandal - Three Pakistan cricketers at the center of a spot-fixing controversy will miss the rest of their tour of England, according to team manager Yawar Saeed. They are appearing before their countryâ€™s top cricket officials at the Pakistani High Commission in London. Scotland Yard may also be waiting to question the players as their investigations continue.

Cardinal has â€śmoved onâ€ť - In a rare sit down interview Nic Robertson speaks with Cardinal Sean Brady, the head of the Irish Catholic Church and the man at the centre of the abuse scandal. Cardinal Brady feels enough has been done for the victims; he says that he has moved on, and sees no reason for the pope to travel to Ireland during his upcoming visit of the United Kingdom. Read the full story

South Africa strike - Public Sector workers have refused to accept a pay deal which saw the government offering a pay rise of 7.5 percent, instead preferring to hold out for the rise of 8 percent which they had originally asked for.

Assange rape inquiry - Julian Assange has given an on-camera interview to a Swedish newspaper following the Swedish prosecutorâ€™s announcement that the investigation into the allegations of rape will be reopened.

Inflatable might - Is it a new heat ray? Is it a technologically advanced piece of modern weaponry? No - it's an inflatable tank. Russia's newest set of military acquisitions will be inflatable in a move designedÂ literally as a â€śshowâ€ť of force. Matthew Chance finds out more.