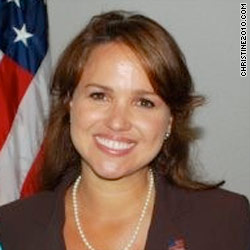 The Delaware Senate candidate backed by the Tea Party alleges that Republican leadership is behind a plot against her.

O'Donnell is challenging moderate GOP congressman Mike Castle in the September 14 primary and has said there is no difference between him and the Democrat in the race, Chris Coons. Her campaign website describes her as "a nationally recognized political commentator and marketing consultant" who previously worked for the Republican National Committee.

After endorsing her earlier this week, the Tea Party announced they will spend up to $250,000 on her campaign ads. "We are launching an aggressive multimedia and multiplatform campaign to help propel Christine O'Donnell to victory, and we've only just begun," said Amy Kremer, chairman of the Tea Party Express, in a statement.

The Weekly Standard: Who is Christine O'Donnell?

The man who calls himself "America's toughest sheriff" is being sued by the US Justice Department.

A lawsuit filed yesterday in a Phoenix federal court claims that the Maricopa County sheriff failed to provide requested documents for an investigation into alleged racial profiling in sweeps to catch illegal immigrants. Arpaio and his lawyers have publicly rejected the charges.

In a press release, the Justice Department indicated this was the first time in 30 years a police agency has refused to cooperate in a civil rights investigation.

On CNN's "John King USA" program last night Arpaio said, "They have thousands and thousands of our documents. And we thought we had this thing resolved but now they sandbag us and they sue me. Why are they doing that when we are cooperating?" Arpaio suggested that the federal government is "ganging up on Arizona" over the illegal immigration issue and called himself "the puppet" in a political battle with Washington.

Arpaio has been Sheriff in Maricopa County for nearly two decades and previously served with the Drug Enforcement Administration. Known for his philosophy of zero tolerance, the sheriff has spoken widely about his programs, which include tent housing for 2,000 convicts, meals that cost less than 15 cents per person, and pink underwear worn by everyone he puts behind bars.

The New York resident, clinical pharmacist and first responder in the 9/11 attacks is one of several American Muslims featured in a series of public service announcements released and produced by the Council on American Islamic Affairs this week.

The series, which aims to address what CAIR describes as a "growing Islamophobia" in America, profiles American Muslims who helped in the immediate aftermath of 9/11. In the video, Rudi says she and others like her did anything they could to help the victims, from "morgue duty to creating a makeshift eye wash station." For three days, she set up a triage center near the World Trade Center, administering first aid to fireman and all those who were looking for survivors.

Rudi told CNN she had never spoken about her experiences as a first responder until a few weeks ago, when she appeared before a community board meeting on the Park 51 project. She was surprised by the level of animosity she faced after detailing her experiences administering aid and telling the audience she was a proud Muslim New Yorker.

According to Rudi, her choice to appear in the PSA was because of her son. She didn't want him to be ashamed of who he is or "to have a room full of people tell him that he doesn't add up to all other Americans because he is Muslim." "The constitution protects all Americans and Muslim Americans are Americans. To lump us into the ball of terrorism is wrong and inaccurate," she added.

Rudi was born and raised in Michigan to Palestinian immigrants and currently serves as the Executive Director of Clinical Trials at Columbia University.

The activist's littering conviction has been overturned by a federal court after he left gallon bottles of water for undocumented border crossers at the Buenos Aires National Wildlife Refuge (BANWR) along the Arizona border.

Millis is a volunteer with No More Deaths, a faith based group that works to assist immigrants. In 2008, Willis and three other volunteers were stopped by U.S. Fish and Wildlife Service officers who cited him for "dumping of waste" into a protected area. He was later convicted of violating a statute prohibiting garbage dumping in an area designated as a wildlife refuge.

According to a press release from No More Deaths, Millis was cited two days after finding the body of a girl from El Salvador who died trying to cross over. He was the first "humanitarian" to be ticketed for littering near a border.

Yesterday in a 2-1 ruling, judges of the U.S. 9th Circuit Court of Appeals declared that water didn't meet the definition of waste.

Millis said in a statement responding to the ruling, "I continue to be saddened by the ongoing tragedy along the border; but I am pleased and relieved that the Court has finally made clear that humanitarian aid is never a crime."

The 18-year-old tennis player from Bradenton, FL, ranked 220th in the world, beat 15th seeded Ivan Ljubicic on Wednesday in a four set match, earning himself a chance to play in the second round of the US Open.

Harrison is the first American male teen to beat a top 20 player in a Grand Slam event since Andy Roddick beat Alex Corretja at Wimbledon in 2001. Harrison won the match against Ljubicic with 13 aces and 44 winners and will play 36th ranked Sergiy Stakhosvsky of Ukraine today.

"To win on this stage here and to take out a top-20 player in the world is the biggest win of my career," he said Wednesday. "I've always believed in myself. I'm extremely excited and really pleased with what happened."

ESPN.com reports that Harrison is coached by his father, Pat but also practices at Nick Bollettieri's tennis academy. When he was 11 years old, he supposedly played the most pivotal match of his life (against his father) and lost.