Massive iceberg on the move in Northern Hemisphere 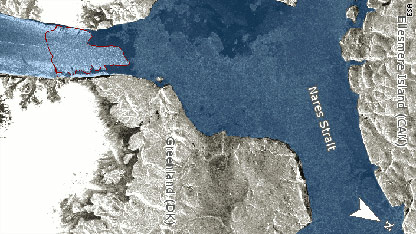 The European Space Agency’s Envisat satellite is tracking the iceberg.

The largest chunk of ice in the Northern Hemisphere is on the move – at a four-hundredths-of-a-kilometer an hour clip.

Satellite imagery from the European Space Agency shows that a massive iceberg that calved from Greenland’s Petermann Glacier on August 4 has cruised into the Nares Strait, putting 28 kilometers between it and its source.

The 245-square-kilometer iceberg – that’s about four times the size of Manhattan – faces a fractured future. The satellite imagery shows it has hit a small island, which is slowing its journey but also threatening to break it up.

The berg is being tracked by the European Space Agency’s Envisat satellite, using both radar and photographs.