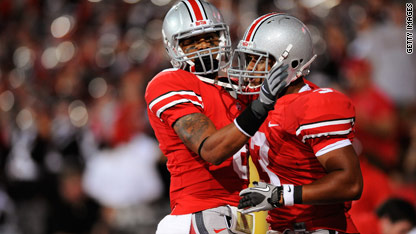 Order was restored in the universe Thursday as last night marked the return of college football.

While Saturday will serve as this week’s main pigskin dish, Thursday night provided a savory appetizer to tide us over. No. 2 Ohio State and Heisman candidate Terrelle Pryor looked in top form in their 45-7 victory over Marshall. No. 14 USC outlasted Hawaii in Lane Kiffin’s debut. And Utah delivered this season’s first big upset with a 24-21 overtime win over No. 15 Pittsburgh, writes SI.com’s Andy Staples.

With several must-see games this weekend, including TCU-Oregon St. and North Carolina-LSU, the season is amongst us. SI.com’s college football experts kick things off with their bold predictions for the 2010 season. With no teams in action today, here’s what else is going on in the world of sports (all times Eastern):

• White Sox vs. Red Sox (7:10 p.m.): Manny being Manny returns to Fenway Park as the White Sox and Ramirez face the slugger’s old team. Both teams desperately need wins to stay in the playoff hunt.

1 - Years quarterback Jeremiah Masoli must sit out after being denied a waiver to play immediately for Ole Miss after transferring from Oregon this summer. SI.com’s Andy Staples examines the NCAA’s latest hypocrisy.

43 - Home runs hit by Toronto Blue Jays slugger Jose Bautista this season, the most in the majors. The seven-year veteran’s previous career high was 16 in 2006.

10 - Games Delonte West will have to sit out at the start of the 2010-11 NBA season. The league suspended West this offseason after the guard plead guilty to weapons charges stemming from an incident last September when authorizes found two loaded handguns, a loaded shotgun and an 8.5-inch Bowie knife on West while riding his three-wheel motorcycle. On Wednesday, the Boston Celtics signed West.