Up the coast: Communities prepare for Earl 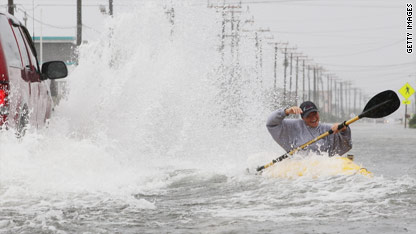 A passing car splashes Kellie Maier who was navigating Highway 12 with a kayak in Kill Devil Hills, North Carolina.

CNN affiliate stations all along the East Coast have been monitoring preparations for Hurricane Earl. Here's what's going on:

Officials say tropical storm force winds are expected to end around 11 a.m. and holiday weekend activities along the Oceanfront will go on as planned, WAVY reports. Strong waves and rip tides are still expected this afternoon, but the rest of the weekend should be sunny, WAVY meteorologists say.

The weekend's activities include the American Music Festival and the Rock 'n' Roll Half Marathon. A tall sand berm is protecting the music festival's main stage from the pounding surf, said city officials, who will decide around 4 p.m. whether to delay the start of Friday's concert.

The surf was up, and so was the wind, in Ocean City, Maryland, according to WBAL, but the hurricane warning for the area was called off. As of 7 a.m. Friday there were just a few sprinkles in Ocean City and sustained winds of about 15 to 20 mph.

Folks in Cape May, New Jersey, boarded up windows and secured boats, outdoor furniture and other objects in anticipation of a storm that appeared to be losing its punch, WPVI reported. Parents and lifeguards limited swimmers to knee-deep water to prevent losses to rip tides on Thursday. By midmorning Friday, waves were getting rougher but winds were relatively light and only a light sprinkle was falling.

The Long Island Rail Road suspended all service on the Montauk line east of Speonk on account of the approaching storm, NY1 reported. On the main line, trains will not go east of Ronkonkoma. The Fire Island ferry will stop running after 3 p.m. The Office of Emergency Management is preparing for possible flooding along the coasts of Brooklyn and Queens.

A museum in Bridgeport that was damaged earlier this year by a tornado was buttoned up for this storm, according to WFSB. The museum's owners asked the business next door to secure patio furniture on its roof, lest it blow off and smash the museum's plate glass windows a second time.

As the wind picked up on the island, Nantucket town officials and locals prepared for Earl for days, WHDH reported. Ahead of Earl, the ferry was packed with people trying to get off Nantucket while town officials prepared and warned anyone who planned on staying to be ready for the storm. 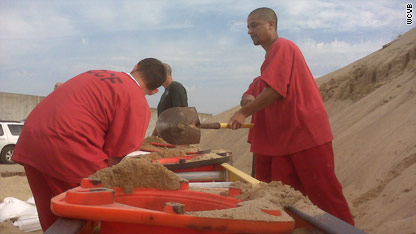 Prisoners use a ladder and traffic cones to fill sandbags in Plymouth, Massachusetts.

In Martha's Vineyard, the normally busy tourist spot was relatively empty on Thursday night, WHDH reported. Folks on the Vineyard are used to the swell of people who come for the summer, but they are now having to prepare for the swells that will come with their latest guest, Earl.

The town of Rye announced it would be shutting down its beaches at 5 p.m. Friday and reopen them at 6 p.m. Saturday, WMUR reported. Rye Fire Chief William Sullivan said anyone going into the water after the beaches are closed will be going in at their own risk. "If they choose to go in the water under dangerous rip tides or dangerous surf, they're on their own, because I am not in favor of risking any public safety personnel to try to help people who don't listen to the experts along the ocean and know what the ocean can do," he said.

Tourism businesses in Bar Harbor were hoping the storm wouldn't interfere with Labor Day weekend action from cruise ships, whale watching tours and nature cruises, according to WABI. A cruise ship that was scheduled to stop there on Friday has already canceled and two others scheduled for Sunday are watching developments.

"We could be pulling the plug on a lot of trips," said Camille Legere, front desk manager at Bar Harbor Whale Watches.

One passenger was killed and four injured when a ‚Äúrogue wave‚ÄĚ hit their cruise ship during a storm earlier this wtwitter.com/i/web/status/1‚Ä¶KW4Ki0
cnni

10:30 am ET December 3, 2022 RETWEET
The knockout round of the World Cup starts now. The US faces off against the Netherlands in a do-or-die match. Foll‚Ätwitter.com/i/web/status/1‚Ä¶KF
cnni

One passenger was killed and four injured when a ‚Äúrogue wave‚ÄĚ hit their cruise ship during a storm earlier this wtwitter.com/i/web/status/1‚Ä¶KW4Ki0
cnni

10:30 am ET December 3, 2022 RETWEET
The knockout round of the World Cup starts now. The US faces off against the Netherlands in a do-or-die match. Foll‚Ätwitter.com/i/web/status/1‚Ä¶KF
cnni