The federal government announces new water cuts for the Southwest as the Colorado River plummets into an even deepe‚Ätwitter.com/i/web/status/1‚Ä¶0j

The Justice Department is opposing the release of details in an affidavit that lays out reasons for the Mar-a-Lago‚Ätwitter.com/i/web/status/1‚Ä¶9t 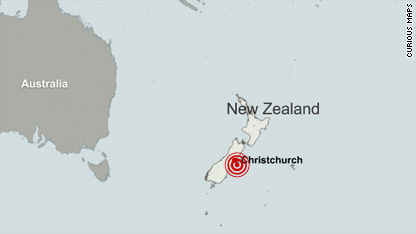 [Updated at 2:57 p.m.] For continuing coverage of the earthquake that hit Christchurch, New Zealand, read our full story here.

[Updated at 2:09 p.m.] The magnitude of the earthquake Saturday in New Zealand was 7.0, down from earlier assessments of 7.4 and 7.2, the U.S. Geological Survey said. The new assessment said the quake was 7.5 miles deep and 20 miles northwest of Christchurch.

An aftershock with a magnitude of 5.7 struck not far from the epicenter about 20 minutes later, the survey said.

Reinier Eulink, general manager of the Holiday Inn in Christchurch, said there's damage around the hotel corridors and "big cracks in the walls."

"It was a big big long jolt, and the building moved a lot," he said. The 13-floor building, with about 150 rooms, was about 40 percent occupied, and he estimated that 80 or more people were staying at the hotel at the time.

Power was knocked out, but emergency power came on. People were milling around in the hotel lobby, trying to get warm during the chilly Southern Hemisphere winter.

"My room is totally upside down," Eulink said.

A Christchurch Hospital shift manager said there are injuries and damage from the quake.

"We are in emergency planning at the moment," he said.

iReport: Are you there? Send images

[Updated at 1:44 p.m.] The earthquake in New Zealand caused "a lot of damage," though there are no reports of serious injuries or major damage, an emergency official said.

"It was like a freight train running through the house," said Chris Monroe, operations manager for the New Zealand Fire Service.

Power is out and damage has been reported all over Christchurch, he said. At this stage, though, most of the damage reports are relatively minor, such as cracks in buildings or broken windows, he said.

New Zealand Herald reporter Jarrod Booker told the paper he was in the suburb of Linwood, New Zealand and was sleeping when he felt "extremely violent shaking."

"Items were falling and crashing around the house," he told the news paper.

Booker told his editors his neighbors chimney had collapsed and crashed through a car's windshield.

[Updated at 1:36 p.m.] We've just had a terrible earthquake," said Paula May, a Christchurch resident. "We have no power. Lots of stuff in the house is all over the floor. All the power is down so I can't see anything. There's no power in the town."

A person who answered the phone at The George hotel in Christchurch, told CNN that "we are cleaning up at the present moment" but wouldn't disclose any more detail.

[Updated at 1:18 p.m.] The Christchurch Press newspaper in New Zealand is reporting that power appears to have been knocked out across large portions of the city.

The quake, and several aftershocks, have been felt throughout the South Island, the paper reported.

News website stuff.co.nz reported that residents were seeing damage in the city.

Colleen Simpson told the website after the quake people ran out into the street in their pajamas and that people were having trouble using their cellphones.

"Oh my God. There is a row of shops completely demolished right in front of me," Simpson told the site.

The site also reported the quake had caused "widespread damage" and was also felt as far as Wellington, New Zealand.

[Updated at 1:11 p.m.] A man who was at the international airport in Christchurch described the scene.

"The entire terminal started shaking," he said. "I knew it was an earthquake.There was not much you could do at that point."

[Updated at 1:02 p.m.] A 7.2-magnitude earthquake has struck near New Zealand, the U.S. Geological Survey said.

The quake was 10 miles deep.

There were no immediate reports of damage or injuries. The quake is not likely to generate a tsunami, according to the Pacific Tsunami Warning Center.

[Posted at 12:49 p.m.] An earthquake with a preliminary magnitude of 7.4 struck Friday near New Zealand, the U.S. Geological Survey said.

5:45 am ET August 17, 2022 RETWEET
The 911 call starts with a jarring observation: ‚ÄúA car just went through my neighbor‚Äôs houscnn.it/3PuHCMxdW4UmI
cnni

5:02 am ET August 17, 2022 RETWEET
Eleven men jailed for life for the gang-rape of a pregnant Muslim woman have been freed on remission, officials sai‚Ätwitter.com/i/web/status/1‚Ä¶Ma
cnni

5:45 am ET August 17, 2022 RETWEET
The 911 call starts with a jarring observation: ‚ÄúA car just went through my neighbor‚Äôs houscnn.it/3PuHCMxdW4UmI
cnni

5:02 am ET August 17, 2022 RETWEET
Eleven men jailed for life for the gang-rape of a pregnant Muslim woman have been freed on remission, officials sai‚Ätwitter.com/i/web/status/1‚Ä¶Ma
cnni

2:24 pm ET August 16, 2022 RETWEET
The federal government announces new water cuts for the Southwest as the Colorado River plummets into an even deepe‚Ätwitter.com/i/web/status/1‚Ä¶0j
cnnbrk