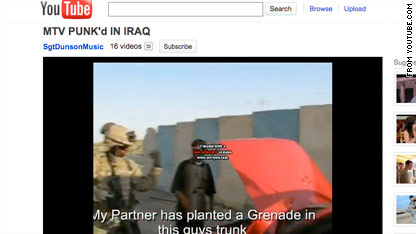 Sgt. Leo Dunson is seen in this YouTube clip playing a similar prank months before al-Baghdadia's television show caused a stir on the air.

The Obama administration hoped that with combat operations coming to a close in Iraq, local forces and authorities would be able to protect the Iraqi street just like the Americans.

But it's doubtful Washington envisioned Iraqi soldiers coming up with their own reality show.

"Put Him in Camp Bucca" - a show The New York Times has dubbed "Punk'd, Iraqi-Style, at a Checkpoint" - is earning the furor of many Iraqis who wonder if there will ever be an appropriate time to make jokes about car bombs.

The premise of the show is similar to the popular Ashton Kutcher-hosted MTV program, except that the joke never changes. Iraqi celebrities are invited to al-Baghdadia television network offices for an interview, but en route, they are stopped at a checkpoint. There, an Iraqi soldier plants an explosive device in their car, and the purported hilarity ensues.

The bewildered celebrities, according to The Times, are called terrorists and told they will be jailed or executed for trying to kill Iraqi soldiers. Camp Bucca, of course, is the formerly U.S.-administered detention facility in Basra that was shut down a year ago as part of the bilateral security agreement between the U.S. and Iraq. It was reported the prison held about 20,000 Iraqi prisoners of war in 2007.

The intro to the Arabic-language program shows freaked-out celebrities pleading with soldiers and hugging them after the high jinks run their course.

Kifah al-Majeed, a Baghdad Operations Command official, told The Times that Iraqi soldiers are allowed to participate in the pranks because the show is sanctioned by their commanders.

"[Al-Baghdadia] sent us a document asking us for permission to do this television show. We agreed, so al-Baghdadia did nothing wrong," he told the newspaper.

Iraqi soldiers have learned plenty about security from their American counterparts over the last few years, and it's possible the idea for planting fake car bombs was an American brainchild as well.

In April, Sgt. Leo Dunson uploaded a YouTube video in which he and his partner planted a grenade in a civilian's trunk during a checkpoint vehicle inspection.

The video's description says, "This is my partner and I working at a traffic control point in Iraq. We decided to scare one of the locals a bit by placing a grenade in his trunk while he wasn't looking. This was all in fun and never in any intent to harm anyone."

As his partner flashes a mischievous grin into the camera, Dunson takes the unsuspecting man to the trunk and begins questioning him about the grenade.

"What's that? What is that?" Dunson asks the man accusingly. The man holds up his hands and says, "No, man. No, man."

The prank plays out for about 30 seconds (as opposed to several minutes for "Put Him in Camp Bucca") before Dunson laughs and says, "We're just playing. ... Did we get you? Did we get you?" The relieved man pats Dunson on the back and smiles as the two shake hands.

In an interview with War News Radio, Dunson addressed the matter of U.S. soldiers posting videos from the war in Iraq, particularly combat footage. The aspiring rapper spoke in favor of the practice, saying that "people deserve to know what is actually going on."

He also described his YouTube prank as light-hearted. He told the station they "were doing all kinds of jokes, having fun" because they didn't want the Iraqis to "think that we hated all them and stuff like that."

The website Gawker, which has never been accused of lacking a sense of humor, chided both Dunson and the show - before having some fun with it.

"Hearts and Minds, people! But, given the uproar over 'Put Him in Camp Bucca,' " Gawker's Adrian Chen wrote, "it's hard to imagine Iraqis really appreciate having a grenade stuck in their trunk by U.S. soldiers, no matter how well-intended."

After posting one of Dunson's rap videos, Chen wrote that Gawker would normally "respond to this with outrage and demand a congressional inquiry. But since combat operations are over and nobody gives a [expletive] about Iraq anymore, we'll just offer some career advice to Sgt. Dunson.

"Do the music thing first, then a reality show. Never the other way around."

Watch a segment from the al-Baghdadia show below:

Companies and people who want to cancel out the impact of their emissions on the climate often turn to something caâ€twitter.com/i/web/status/1â€¦hw
cnni

7:40 am ET October 18, 2021 RETWEET
Police in Australia are searching for a 4-year-old girl who went missing from a campsite in Western Australia on Saâ€twitter.com/i/web/status/1â€¦s2
cnni