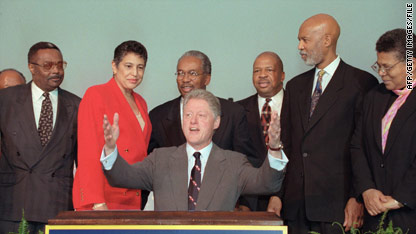 Jefferson Thomas, left, with members of the "Little Rock Nine" and former President Bill Clinton in 1998.

Jefferson Thomas, one of the so-called "Little Rock Nine," the nine students who integrated Central High School in Little Rock, Arkansas, in 1957, has died, according to Carlotta Walls LaNier, president of the group's foundation. He was 67.

Thomas died of pancreatic cancer on Sunday, the Little Rock Nine Foundation said in a statement.

As a 15-year-old, Thomas was one of the nine African-American students who braved segregationist mobs to integrate the all-white school under the protection of military forces.