On the Radar: Obama and economy, latest tropical storm 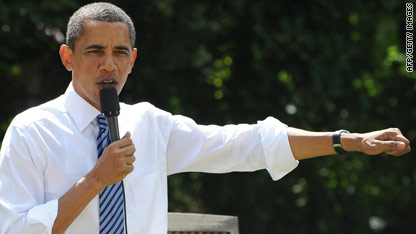 President Obama will focus on economic issues in two speeches this week in the Midwest.

Obama's economic push - On this Labor Day, the White House will put its focus squarely back on the economy, following a week in which the Obama administration concentrated on Middle East peace talks and the end of the U.S. combat role in Iraq.

In two speeches this week President Obama will try to frame his administration's response to the recession ahead of the midterm elections in which Democratic majorities in the House and Senate may be on the line. Obama will outline actions he wants to see taken to help speed up the economic recovery, first in Milwaukee, Wisconsin, on Monday and then in Cleveland, Ohio, on Wednesday.

Poll finds GOP election advantage - With the midterm elections two months away, it seems Democrats may have to scramble to catch up. A CNN/Opinion Research Corp.┬Āpoll asked people if they would vote for a Republican or a Democrat in their congressional district. By a 52 percent to 45 percent margin, respondents favor the Republicans on the "generic ballot" question.

Tropical Storm Hermine - Tropical Storm Hermine is drawing a bead on south and central Texas. The storm is off northeast Mexico in the Gulf of Mexico and could make landfall near Brownsville, Texas, on Monday night or early Tuesday. Forecasters say the storm could dump up to a foot of rain in some places.