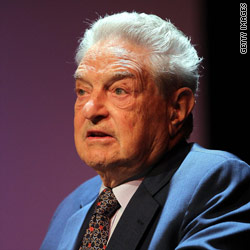 The philanthropist and financier announced a $100 million grant to Human Rights Watch, the largest grant he has made to a nongovernmental organization.  According to a statement released this morning, the grant will be used to further the organization’s goals and outreach around the world.

“Human Rights Watch must be present in capitals around the globe, addressing local issues, allied with local rights groups and engaging with local government officials,” Soros said in the statement.

In an interview with the New York Times, Soros, 80, said age was a factor in his decision to grant such a large sum of money.  “Originally I wanted to distribute all of the money during my lifetime, but I have abandoned that plan. My foundation should continue, but I still would like to do a lot of giving during my lifetime, and doing it this way, with such size, is a step in that direction,” he said.

Soros was born in Budapest, Hungary, and survived the Nazi occupation. He fled Hungary for England, eventually settling the United States where he built a large fortune through his investment advisory fund. Known as the “man who broke the Bank of England,” Soros reportedly made $1 billion when the bank withdrew currency from the European exchange rate mechanism, thereby devaluing the British pound.

Forbes placed Soros No. 35 on its World’s Billionaires list this year and estimates his net worth to be about $14 billion. In January, he gave $4 million to Haiti, and the Human Rights Watch grant brings Soros’ total contributions this year to about $700 million.

In a study released yesterday, the chair of the nutrition department at Harvard University and other experts assert that the Atkins diet leads to an increased risk of death.

Willett has stated in the past that the USDA food pyramid is wrong and several years ago introduced a new type of food pyramid which puts exercise and weight control at the foundation.  Willett and his team believe that these two elements greatly influence a person’s chance of staying healthy.

The Episcopal Church's bishop of New York is one of the expected attendees at an “emergency interfaith meeting” to address the growing tide of fear and intolerance many feel has emerged in the debate over the Park 51 Islamic center project in New York. At 1 p.m. Tuesday Sisk and others will issue a joint declaration which underscores the responsibility of U.S. clergy to communicate solidarity and compassion during this time of heightened tension.

They also will lay out a plan of action for future interfaith collaboration. Late last month, Sisk wrote a letter to the people of his diocese. In it, he said, “The plan to build this center is, without doubt, an emotionally highly-charged issue. But as a nation with tolerance and religious freedom at its very foundation, we must not let our emotions lead us into the error of persecuting or condemning an entire religion for the sins of its most misguided adherents.”

In his latest book, released Tuesday in the United States, the well-known theoretical physicist argues that God is “not necessary” when describing the creation of the universe.

Hawking, a best-selling author and professor, concludes in “The Grand Design,” that the Big Bang was the result of the inevitable laws of physics. He says in the book that “spontaneous creation is the reason why there is something rather than nothing, why the universe exists, why we exist.”  He also writes, “It is not necessary to invoke God to light the blue touch paper and set the Universe going.”

Hawking will be a special guest on CNN's Larry King Live on Friday.