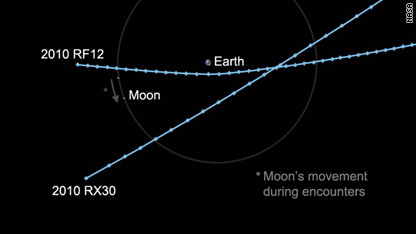 The objects don't pose a threat to Earth, and┬Āthey will not be visible to the naked eye, said Donald Yeomans, manager of NASAŌĆÖs Near Earth Program, which tracks potentially hazardous asteroids and comets within 28 million miles of Earth.

In┬Ācase you were┬Āwondering,┬Āthat means the two asteroids will pass within 0.6 and 0.2 lunar distances from the Earth, respectively. The first will be closest to Earth over the north Pacific, and the second, over Antarctica.

"Things like this happen every day that we simply donŌĆÖt know about because we donŌĆÖt have the telescopes large enough to find them or surveys that are looking full-time," he said. "This demonstrates the system's working on some level, but we need larger telescopes and more of them to find objects that are coming this close."