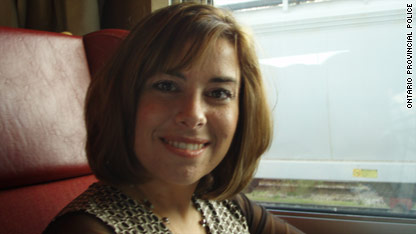 Police are searching for who killed nurse Sonia Varaschin.

A pediatric nurse from Ontario has been murdered and police are asking the public Wednesday for their help finding her killer.

Sonia Varaschin was reported missing August 30 when the 42-year-old didn't show up for her morning hospital shift, said Constable Jonathan Beckett.  That same morning, someone called police about a white Toyota Corolla parked on their street in the city of Orangeville, less than a mile from Varaschin's townhouse.

Investigators noticed blood on the outside of the car, ran its tag and determined it was the nurse's car, Beckett said. Police then went to her townhouse, where they found a "significant" amount of blood inside the home and in its doorway. For more than a week, her family told local reporters that they were hoping she would be found alive, but police prepared them for the worst, Beckett said.

On Sunday, a dog walker discovered Varaschin's remains in a rural area northwest of Toronto. Investigators are looking for a beige, blood-soaked fitted sheet and comforter that they suspect were taken from Varaschin's residence, according to CNN affiliate CTV.

Beckett said it's likely Varaschin knew her killer or killers, but it is possible she did not. He declined to answer any further questions about the condition of the house or the car.

"A forensic identity team has conducted a detailed analysis of the car and Sonia's residence, and where the remains were found," said Beckett.

A Facebook page has been created to help find Varaschin's killer.

"Orangeville is a small place - only 30,000 people - so this has shaken many here," said Beckett.

Police are urging anyone who may have seen Varaschin to immediately contact the dedicated tip line at 519-941-2522, ext. 2211. Tips can also be called in to Crime Stoppers at 1-800-222-TIPS, or emailed to police from the OPP Criminal Investigation Branch website for unsolved cases at http://www.opp.ca.