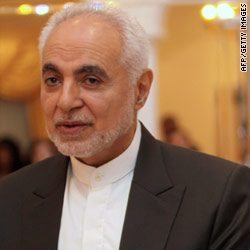 Two spiritual leaders plan to go ahead with actions that have sparked worldwide debate. Imam Feisal Abdul Rauf will talk with CNN’s Soledad O’Brien on Wednesday evening about his decision to move ahead with the controversial Cordoba House, a community center and mosque to be built within blocks of New York’s ground zero. Meanwhile, Pastor Terry Jones told CNN’s Anderson Cooper on Tuesday night that his congregation will probably continue with its plan to burn copies of the Quran on Saturday, the ninth anniversary of the September 11 attacks.

Both men have faced fierce criticism for their decisions. Rauf’s efforts have resulted in protests on the streets of New York and media attention on a global scale. Jones has reported death threats and has been told that Gen. David Petraeus believes the action at the 50-member Dove World Outreach Church in Gainesville, Florida, could cause harm to U.S. troops overseas. On Tuesday, protesters in Afghanistan reportedly burned an effigy of Jones.

In an opinion piece in the New York Times on Wednesday morning, Rauf described the center as a recreational facility with prayer spaces for not only Muslims but Christians and Jews as well. The name comes from a Spanish city where Muslims, Christians and Jews thrived culturally during the Middle Ages, he explained. “Our initiative is intended to cultivate understanding among all religions and cultures,” he said.

Jones told Anderson Cooper that his church is weighing its options, but he is inclined to follow through with the Quran-burning. “We are simply burning a book,” Jones said. “General [Petraeus] needs to point his finger to radical Islam and tell them to shut up, tell them to stop, tell them that we will not bow our knees to them.”

In May 2009, 15 Afghan citizens were killed and many more injured after Newsweek magazine reported that U.S. military interrogators flushed a Quran down a toilet. The report was later retracted.

The New York mayor - who supports the Islamic community center being located near ground zero - also affirmed the right of Pastor Terry Jones' Florida church to burn copies of the Quran on Saturday.

"In a strange way, I'm here to defend his right to do that," Bloomberg said Tuesday. "I happen to think that it is distasteful. I don't think he would like it if somebody burnt a book that in his religion he thinks is holy. ... But the First Amendment protects everybody."

After 21 years in office and more than four decades of leadership by a Richard Daley, the Chicago mayor has announced that he will not seek a seventh term. The decision shocked many and immediately brought speculation about what it might mean for Chicago-born White House Chief of Staff Rahm Emanuel.

“Simply put, it's time," Daley said Tuesday. "Time for me, it's time for Chicago to move on."

The 68-year-old Democrat is the son of the iconic Chicago mayor also named Richard Daley, who died in his 21st year in office. After taking the job in 1989, the younger Daley was easily re-elected to five more terms. This year, however, he faced dismal approval ratings and a $655 million budget shortfall, reported Chicago Breaking News.

Personal issues had also come to the forefront. His wife is being treated for metastatic breast cancer that has spread to her legs and made it difficult for her to walk. She was at his side Tuesday.
Emanuel expressed his shock in a statement released Tuesday, while the White House downplayed any notion of him leaving for Chicago. Still, an April interview with Charlie Rose has fed speculation about Emanuel’s plans. "I hope Mayor Daley seeks re-election," Emanuel told Rose at the time. "I will work and support him if he seeks re-election. But if Mayor Daley doesn't, one day I would like to run for mayor of the city of Chicago."

Conflicting reports from Yahoo Sports and ESPN leave the fate of the 2005 Heisman winner’s trophy undetermined. However, it appears likely that Reggie Bush will be the first football player in the award’s 75-year-history to have it taken away.

Bush, who is now with the Super Bowl champion New Orleans Saints, will lose his trophy by the end of September, according to a report by Charles Robinson and Jason Cole of Yahoo Sports. Citing two sources, Yahoo reported that the decision was made because Bush was deemed ineligible for NCAA play during the 2004 and 2005 seasons, when he accepted illegal cash and gifts while playing at the University of Southern California. However, the Heisman Trophy Trust, which governs the decision, denied this report to ESPN late Tuesday.

USC has been punished for the violations, including a two-year suspension from bowl play and a reduction in scholarships, according to reports. Additionally, the university has been ordered to return its version of the Bush Heisman and eliminate any reference to him in its football program.