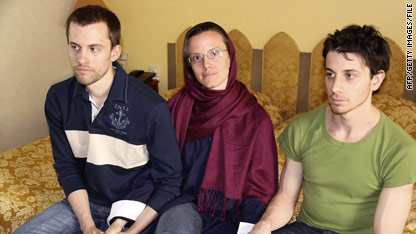 Officials have said Sarah Shourd will be the one hiker released Saturday.

[Updated at 3:28 p.m.] Iran will be releasing Sarah Shourd "very soon", a spokesperson from the Iranian Mission to the United Nations tells CNN.

[Posted at 12:12 p.m.] Iran says it will release one of the three American hikers detained for more than a year on Saturday, a day after the conclusion of the Islamic holy month of Ramadan, according to an official at the ministry of culture and Islamic guidance.

The source would not disclose which of the three -  Shane Bauer, Josh Fattal and Sarah Shourd– would be released.

The three were detained July 31, 2009, after they allegedly strayed across an unmarked border into Iran while hiking in Iraq's Kurdistan region. Tehran has accused the three hikers of being spies, which they deny.

The official said one of Iran's vice presidents will be present when the hiker is released at 9 a.m. Saturday.

President Barack Obama has called for their release, saying "their unjust detention has nothing to do with the issues that continue to divide the United States and the international community from the Iranian government."

The hikers' mothers were allowed to visit them in May in Tehran. The mothers said that at the time, their children told them they had not been questioned for several months.