Congressional leaders unveil a plan that would keep the government funded into February as they scramble to avert aŌĆtwitter.com/i/web/status/1ŌĆ”Ho 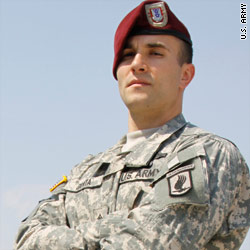 The only living member of the military to be decorated with the U.S. Medal of Honor since the Vietnam War received a phone call of thanks and congratulations last week from President Barack Obama. Rose Giunta, mother of U.S. Army Staff Sergeant Salvatore Giunta, told a Cedar Rapids news station that her son was profoundly touched by the honor bestowed on him. Yet the deadly ambush, in which he lost a friend, was having a deep effect on him.

Giunta, 25, was on patrol in Afghanistan during the attack when his body armor protected him from what could have been a fatal bullet wound to the chest. Recovering from the blow, he saved two colleagues, and then recovered a mortally wounded soldier from two insurgents. He remained with the soldier until help arrived.

GiuntaŌĆÖs mother, who will not see her son until he returns to Washington to accept the award, described the award as bittersweet.

ŌĆ£As much as we're here because of what Sal did,ŌĆØ she said, ŌĆ£there's parents out there that will not know, they'll never know what this feels like. And yet, their sons and daughters deserve this too."

KWWL: Parents of Medal of Honor recipient proud and humbled

Following a day when he was honored for breaking Ty CobbŌĆÖs all-time hitting record, former Cincinnati Reds manager and player Pete Rose shocked a private audience Saturday when he broke down and apologized to former teammates and fans for illegally betting on Major League Baseball.

Rose, who was banned from the sport for life for the offense in 1989, publicly denied doing it until 2004. According to the Cincinnati EnquirerŌĆÖs John Erardi, an event that began as a roast for Rose ended up as a repentance.

"I disrespected the game of baseball," Rose said "When you do that, you disrespect your teammates, the game and your family."

A Saudi Arabian diplomat has asked the U.S. for political asylum because he is gay. Ali Ahmad Asseri is the first secretary of the Saudi consulate in Los Angeles. NBC reports Asseri notified the Department of Homeland Security saying that Saudi officials had revoked his diplomatic passport and ordered him home. He said that consulate employees had followed him to gay bars, and discovered that he also had formed a friendship with a Jewish woman from Israel.

Complicating matters further are reports that Asseri posted a letter on a website condemning his home country for its ŌĆśbackwardness. He also allegedly reported that he would expose other Saudi royalty who were employed by the U.S consulate, but were really living lives of leisure.

ItŌĆÖs the first time since 1994 that a Saudi diplomat is known to have sought asylum on human rights grounds. Asseri, who is said to be in hiding, told NBC in an email: ŌĆ£My life is in a great danger here and if I go back to Saudi Arabia, they will kill me openly in broad daylight.ŌĆØ

MSNBC: Saudi diplomat seeking asylum: 'My life is in danger'

The staunchly liberal daughter of former President Ronald Reagan has written a scathing column in Newsweek saying that she and other supporters of Barack Obama are devastated by his performance as President, as well as his inability to empathize with the troubles of average Americans, particularly in light of the BP oil disaster.

ŌĆ£The no-drama, too-cool-for-school persona worked really well during the campaign, especially when he came up against a hothead like McCain,ŌĆØ Davis said. ŌĆ£But when you are leader of the free world and a man-made environmental disaster is wiping out an entire region of the country; when birds and turtles and marine mammals are dying excruciating deaths; when people are losing their entire way of life and their livelihoods; when millions of others are watching helplessly, weeping at the suffering and the devastation and trying to think of some way, no matter how small, to help ... being cool doesnŌĆÖt cut it."

The 26-year-old co-founder of Facebook has given an exclusive interview to the New Yorker, just one week after being placed at the top of Vanity FairŌĆÖs New Establishment List. The elusive Zuckerberg spoke to New Yorker contributor Juan Antonio Vargas, telling him that he handled the creation of Facebook poorly due to immaturity.

Zuckerberg is the subject of Aaron SorkinŌĆÖs upcoming film ŌĆ£The Social Network,ŌĆØ The biopic, which opens in November, is said to be a scathing portrait set during his days at Harvard University. In the New Yorker piece, Zuckerberg tells Vargas that much of what he has heard is in the film is wrong. ŌĆ£I know the real story,ŌĆØ he said.

On an exoplanet called GJ 367 b that's orbiting a star 31 light-years away from our sun, a year only lasts for abouŌĆtwitter.com/i/web/status/1ŌĆ”kz
cnni

4:52 pm ET December 2, 2021 RETWEET
The saying ŌĆ£shot himself in the footŌĆØ is literal in this case.
sarasidnerCNN

3:34 pm ET December 2, 2021 RETWEET
Buying a cheap property in Italy is an attractive prospect for many travelers, particularly with the ever-growing nŌĆtwitter.com/i/web/status/1ŌĆ”XG
cnni