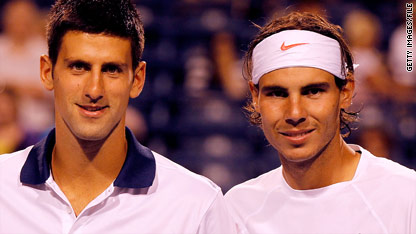 Novak Djokovic, left, and Rafael Nadal will try again today to go after the men's U.S. Open title after weather delays kept them from playing Sunday.

For the first time since Reggie Miller, Shaquille O'Neal and the rest of the 1994 team took the gold, the United States has won the FIBA World Championships. Pitted against host country Turkey, Team USA cruised to an 81-64 victory Sunday night. But while Team USA‚Äôs performance at the worlds was impressive enough to garner attention all on its own, what was more impressive was the fact that they won with a roster lacking a traditionally star-studded line-up.

As SI.com‚Äôs Jack McCullum explains, Team USA was poised to have the likes of such NBA power players as Kobe Bryant, LeBron James and Carmelo Anthony on its roster. But as each backed out for personal and professional reasons, the defense-oriented ‚ÄúB-Team‚Äù emerged as a young squad searching for their identity on the court. Though generally touted as the favorites to take the gold, Team USA worked diligently to prove its ability to mesh on the court and ultimately reaped the benefits of a strong defense and the offensive prowess of one Kevin Durant.

After an American victory on Turkish soil at the worlds, we turn our attention back to the U S of A for the men‚Äôs U.S. Open finals and the Jets-Ravens opener.

Jets vs. Ravens (7:00 p.m. ET) ‚Äì The Gang Green will open their season tonight in the New Meadowlands Stadium against the Baltimore Ravens. Given Jets coach Rex Ryan‚Äôs bold Super Bowl predictions, his team will need to pull out all the stops tonight to save face as they take on Ray Lewis and company.

109 ‚Äì Number of consecutive wins Penn State‚Äôs women‚Äôs volleyball team had notched prior to Saturday night‚Äôs loss against Stanford at the Nike Big Four Volleyball Classic in Gainesville, Fla. The loss marked the first time Sept. 15, 2007 that the team had lost a match.

251 ‚Äì Number of laps driver Denny Hamlin lead at this weekend‚Äôs Sprint Cup race at Richmond. The victory locked in Hamlin‚Äôs number one seed for the upcoming Chase for the Championship which begins next Sunday at Loudon. Hamlin will compete against 11 other drivers in the 10-week, 10-race playoff.