"I accept the apologies, and I said thanks to him for the concern and all the rest of the team, because he promised that he is going to make everybody on his team respect … women," Sainz said on CNN's "Rick's List." "And I think the important point is that women deserve respect in any profession, so I think it's going to happen."

"I think that it’s not good that this kind of thing happened, and it mustn't happen anymore. I'm agreeing with the idea that it's good that everybody knows that a woman or a man deserve the same treatment in the locker room," Sainz said.

She said she never felt she was in danger in the locker room. Later, she said, other reporters said they heard the players say things about her that she didn’t hear.

"One colleague – one female colleague – came with me and [told] me, 'I'm so sorry. It mustn't happen. It's not OK,'" Sainz said. "So I tried to calm her. … I really know that she [heard] something that I didn't hear, and the rest of the media … heard things that I didn't really hear. So I really appreciate the concern about it."

[Original post, 9:58 a.m.] The New York Jets think this is their year. They were one game from the Super Bowl last season, were just featured on HBO’s NFL documentary series “Hard Knocks” and their coach Rex Ryan is on the cover of this week’s New York Times magazine and seems to love putting himself and his team in the spotlight.

So you’d think that with their season starting tonight with the first game in their brand new stadium, on Monday Night Football no less, they’d be thrilled to be on the front page of the New York tabloid papers. But today’s publicity isn't the kind of publicity the Jets really want - the league is investigating whether coach Ryan, a member of his staff, and some of his players behaved inappropriately toward TV Azteca reporter Ines Sainz.

Sainz, former Miss Spain, tweeted that she was “dying of embarrassment” according the Post. 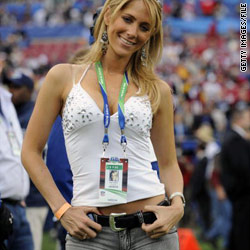 Sainz told her colleague that she did notice that footballs were being thrown her way but, “to be quite honest, it didn’t bother me… I took it as a joke, and none of the footballs actually hit me.”

“It was definitely a joking tone, very amicable," Sainz said, regarding the tone Sanchez had with her. “I wasn’t offended.”

“I was surprised to wake up on Sunday and have a call from the NFL , saying that they wanted to talk to me about what had happened at the Jets; and I asked… what happened?" Sainz told TV Azteca. "And they said well there is a pretty powerful accusation of harassment and then it was at that point I realized the magnitude of what had happened. “

The NFL says it’s investigating and The Association for Women in Sports Media says the Jets and the league have been responsive to their concerns. They also say on their website that they plan to hold an educational session for the Jets this week or next.

The Jets are one of the favorites to go the Super Bowl this season, but the New York Daily News’s Gary Myers looks at how this incident could derail the team if they’re not careful.