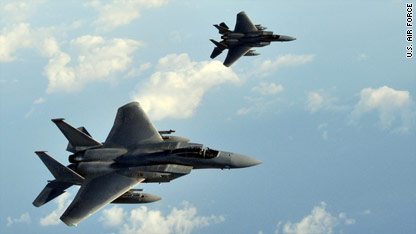 Boeing F-15 fighter jets like these would be a large part of the reported arms deal.

The United States may be on the verge of its largest arms sale ever, a package of aircraft and weapons systems for Saudi Arabia that could total $60 billion when the final bill is done, according to a report in Monday’s Wall Street Journal.

If completed, the deal could also generate more than 75,000 jobs, the Journal reported.

The Obama administration is expected to notify Congress of the planned sale this week, according to the Journal report. Production would take place over five to 10 years, the Journal said.

Key components of the sale would be Boeing F-15 fighter jets – as many as 84 new ones and the refurbishment of 70 others – and helicopters including 70 Apaches, 72 Black Hawks and three dozen Little Birds.

Discussions are also under way over naval and missile defense systems for the Saudis, the Journal reported.

Meanwhile, Boeing is a contender in another F-15 sale, this time to South Korea.

The Korea Times reported Monday that the Pentagon has approved a Boeing request to market a stealth version of the F-15, dubbed the Silent Eagle, to Seoul.

The Times points out, however, that Lockheed-Martin’s F-35 Lightning and the Eurofighter Typhoon may be stronger contenders to win a South Korean order for 60 fighter jets.