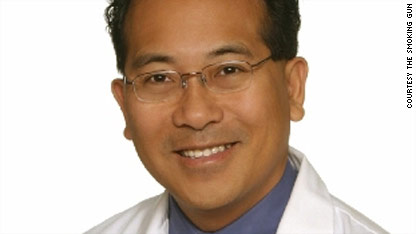 Dr. Red Alinsod is being sued for engraving his patient's name on her uterus.

A California gynecologist is being sued for branding a patient's name on her uterus using an "electrocautery device."

Dr. Red Alinsod removed Ingrid Paulicivic's uterus during an operation at his Orange County office in 2006, according to the complaint posted on The Smoking Gun's website. The Laguna Beach doctor carved "Ingrid" on the organ, according to the site, because he "did not want to get it confused with others."

Alinsod told the site that labeling of body parts in that manner is not typical. But, he said, he "felt comfortable putting her name on the uterus" since the 47-year-old hairdresser was a "good friend."

Paulicivic's attorney, Devan Mullins, told CNN.com that his client did not know her physician before consulting him for the operation. Paulicivic and her husband learned of the branding during a follow-up visit, the lawyer said.

"Alinsod hesitated to give them the photos," the attorney said, sparking the couple's suspicion that something was wrong. The doctor told the couple that he didn't know how to copy the images, so the husband, who is a photographer, showed Alinsod how to move the images to a memory card, and the couple took them, Mullins said.

Later in the husband's office, the couple looked at the photos and were shocked to see "Ingrid" spelled out in inch-high letters on her uterus.

"They reacted like anyone would react - 'Oh my God, I cannot believe this happened,' " the lawyer said.

The couple hired Mullins, who tried for 90 days to notify Alinsod of an impending complaint, but the doctor did not react. "That's what's been odd - that we've gotten no response from him whatsoever," Mullins said.

CNN.com spoke with Alinsod's office manager Tuesday, who said that the physician was seeing patients and that he would not comment on the litigation.

According to Alinsod's website, he formerly headed gynecologic services at George Air Force Base in California and Nellis Air Force Base in Nevada. He was affectionately called a "Combat Gynecologist" by his colleagues, it says.