RT @CNN: A Memphis police officer admitted taking two photos of the brutally beaten Tyre Nichols and sharing one image with others, recordsā¦

Authorities in Quebec said two children have died and six others were taken to area hospitals with injuries after aātwitter.com/i/web/status/1ā¦On

Ukrainian President Zelensky is visiting the UK today for the first time since Russia's invasion of Ukraine, Downinātwitter.com/i/web/status/1ā¦wz

RT @CNN: President Biden is delivering his second State of the Union address. It will be his first in a split government, with the House coā¦ 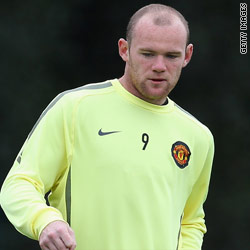 Soccer fans worldwide are wondering if the British striker for Manchester United - benched this weekend following a sex scandal - will be on the field Tuesday evening. While his coach denies any retribution toward Rooney, fans have angrily harassed the young player after allegations that he paid women for sex while his wife was pregnant last year. Two prostitutes came forward in the scandal.

While the 24-year-old Rooney and his wife Coleen have apparently reconciled, Rooney still faces other fallout from the scandal. Coca-Cola is considering firing him from a lucrative endorsement deal, according to Australiaās Herald Sun. Tiger Woods reportedly lost at least $12 million in endorsements following his own sex scandal, the paper said.

The beloved civil rights photographer, who captured iconic images of the movement's history, also was an FBI informant, according to a special report in The Commercial Appeal of Memphis, Tennessee. Writer Marc Perrusquia reports that Withers was known as āME338-Rā in documents obtained from the FBI through the Freedom of Information Act.

Withers died in 2007 at the age of 85. The FBI will not release his individual informant file, and the Justice Department won't even confirm that it exists, The Commercial Appeal reports . When the government released censored files relating to another investigation of Withers, a single reference to āME338-Rā was left uncovered. It proved to be the connection to Withers as FBI informant, the paper said.

During Withers' time as "a foot soldier to J. Edgar Hooverās domestic intelligence program," he filed reports and gave the bureau photographs of civil rights activists including King, the Rev. James Lawson, and Andrew Young, Perrusquia writes. Withers also spied on local members of the black leadership in Memphis itself, he says, where Withersā Beale Street studio was a cultural landmark.

The photographerās children defended their father and his civil rights record. "My father's not here to defend himself. That is a very, very, strong, strong accusation, " his daughter Rosalind Withers told The Commercial Appeal. āHe had been harassed, beaten, shot at,ā said the photographer's son, Rome Withers. āAt that time, when you are the only black on the scene, youāre in an intimidating state.ā

Young told The Commercial Appeal he had no problem with the notion of Withers as an informant. He said Withers was a good photographer whose photos brought national publicity to a transparent movement with nothing to hide. āI donāt think Dr. King would have minded him making a little money on the side,ā Young said.

The landownersā rights activist wants the EPA to allow landowners in southern New York state to drill for natural gas. He says hydraulic fracturing, known as fracking, is a safe and long-established practice which does not affect groundwater. Environmentalists disagree, and the EPA is holding hearings this week on the issue.

Fitzsimmons is the president of the Joint Landowners Coalition of New York, which educates landowners about safe natural gas development and their mineral leasing rights. He is a lifelong resident of Binghamton and owner of a 185-acre farm.

While a report from Pennsylvaniaās Department of Environmental Protection supports fracking, Fitzsimmons said a documentary by filmmaker Josh Fox called "Gasland," released at the Sundance film festival this year, is "a farce." Its āhype and speculationā is halting progress on natural gas drilling in his area, Fitzsimmons said.

He said the community has been hurting for a long time, and natural gas drilling could bring jobs and money that would improve it. āWe donāt have anything here. Itās the only hope weāve got.ā

Philadelphia Inquirer: Strong positions on either side of "fracking" at EPA hearing

MarcellusCoalition.org: In His Own Words: Regulator separates fact from fiction

The 91-year-old activist - who was dragged out of her congressmanās office while protesting the Iraq war, arrested nine times for trespassing at a nuclear power plant, and spent a month in a federal prison for painting āThou shalt not killā on nuclear submarines - was profiled Monday in The Boston Globe.

Crowe, of Northampton, Massachusetts, has been active since the 1960s, and is part of what the newspaper describes as "an aging group of liberal dissidents." āPeople my age have been lulled into the idea that they shouldnāt take risks, that they should stay comfortable and take the easy way,āā Crowe told the Globe. āBut weāve lived our lives, and we have nothing to lose ā no kids or jobs to worry about. "

So how many times has Crowe been seized for acts of civil disobedience? āNot enough,ā she told the Globe.

Boston Globe: A profile for the ages

The former Disney CEO is promoting the release of his new book Tuesday, amid reports that he may take over the Tribune Company. "Working Together: Why Great Partnerships Succeed" includes Eisnerās take on 11 successful business partnerships, including those of Brian Grazer and Ron Howard, and Bill and Melinda Gates.

Eisner recently gave The Daily Beast his best management tips. Eisner believes "successful partnerships are marked by a series of traits, including the ability to share, be vulnerable, and speak freely," Peter Lauria writes in The Daily Beast. The economy, Eisner told Lauria, has been infected by āthe death of honesty.ā

Donāt go into a partnership with a plan for how it will end, said the man who 's been through messy breakups with Michael Ovitz, and Harvey and Bob Weinstein. āIf thereās a pre-negotiated exit, which most people have, it doesnāt force you at the end of the day to make it work. You can just push a button to end it," he told Lauria.

āIn every business, in every industry, management does matter,ā Eisner said. āSome things in media are about who is running [it] . ā¦ People do make the difference.ā

3:08 pm ET February 8, 2023 RETWEET
The Biden administration is planning to roll out a roadmap as early as Thursday on what it will mean for the countrātwitter.com/i/web/status/1ā¦Qd
cnni

3:08 pm ET February 8, 2023 RETWEET
The Biden administration is planning to roll out a roadmap as early as Thursday on what it will mean for the countrātwitter.com/i/web/status/1ā¦Qd
cnni

12:55 pm ET February 8, 2023 RETWEET
Authorities in Quebec said two children have died and six others were taken to area hospitals with injuries after aātwitter.com/i/web/status/1ā¦On
cnnbrk

10:19 am ET February 8, 2023 RETWEET
Ukrainian President Zelensky is visiting the UK today for the first time since Russia's invasion of Ukraine, Downinātwitter.com/i/web/status/1ā¦wz
cnnbrk