Hiker's mom: 'Its our turn to have our kids back with us' 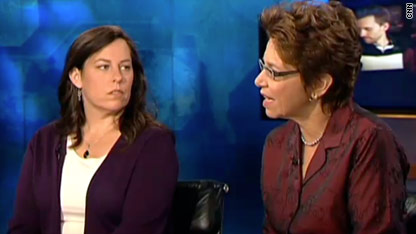 Cindy Hickey, left, and Laura Fattal ask for Iran to release their sons from a Tehran prison.

The mothers of two U.S. men still being held in Iran told CNN they are hopeful their sons will soon be able to join recently released detainee Sarah Shourd and enjoy their freedom too.

"What we really want of course is there release," Laura Fattal said on CNN's American Morning. "We're so happy Sarah's home - but its our turn to have our kids back with us."

Laura Fattal appeared on CNN with Cindy Hicky to appeal to Iran to release their two sons who have been detained for more than a year. They spoke out a day after Sarah Shourd was released from Iran and reunited with her mother in Muscat, Oman after Iranian authorities released her from a Tehran prison where she had been held for 14 months.

The three Americans were detained after they allegedly strayed across an unmarked border into Iran while hiking in Iraq's Kurdistan region. Iran accused the three of spying, a charge the United States and the hikers have denied.

Shourd, 32, left behind fellow Americans Shane Bauer, 28, who is her fiance, and their friend, Josh Fattal, 28.

"Iran knows they have three innocent hikers, one of which they released," Fattal told CNN.

Ruchika Talwar, a 28-year-old resident at the University of Pennsylvania, said she and a group of area physicians hâ€twitter.com/i/web/status/1â€¦FG
cnni

2:30 pm ET May 6, 2021 RETWEET
The intimate letters â€” addressed to Gunilla von Post, an aristocrat he met weeks prior to his 1953 marriage to Jacqtwitter.com/i/web/status/1â€¦72bK
cnni

1:33 pm ET May 6, 2021 RETWEET
Bitcoin is facing an environmental backlash over the energy-intensive technology underpinning it. A new crypto calâ€twitter.com/i/web/status/1â€¦B8
cnni