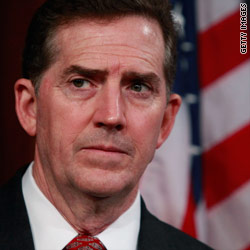 The oldest man ever to receive the Democratic nomination for mayor of Washington has defeated the youngest man ever elected to that position.

Vincent Gray, 67, ended Adrian Fenty's effort at re-election Tuesday in the Democratic primary. Washington, which rarely votes Republican, appears to have found its next mayor in the man who currently serves as its City Council chairman.

The Washington Post reports Wednesday that Fenty – elected to office in 2006 by historic margins as a brash reformer – lost support because of his aggressive approach, particularly to school reform, and because of perceptions that he favored the city's wealthy, predominantly white neighborhoods.

Gray came into the limelight in 2004 when he was elected to represent Ward 7. Previously, he'd served as executive director of the Association of Retarded Citizens and Covenant House Washington. He became chairman of City Council in 2006.

Before supporters Tuesday night, Gray said, "Make no mistake - school reform will move forward in a Gray administration. And it will be done in a holistic way, with a strong, empowered chancellor who works with parents and teachers."

A seventh-grader from the suburbs of Chicago, Illinois, is the talk of the fashion world this week after being profiled in The New Yorker. Tavi Gevinson, 14, attracts 50,000 readers on her Style Rookie blog, which she launched in 2008. Readers include Chanel's Karl Lagerfeld.

Her catwalk reviews and trend reports have become so influential, Tavi nabbed a coveted front-row seat at the Milan shows last winter. She also just produced her first fashion layout for the September issue of BlackBook.

"Though the fashion world is accustomed to both youth and eccentricity, Tavi is a rare spectacle," writes The New Yorker's Lizzie Widdecombe. She describes Tavi as impishly small. The girl even has her own take on the famed Anna Wintour bob and oversized glasses. Her influences: Japanese street kids and evil fairies. Her mission statement: "Dress however you please and embrace rude stares. It means that what you're wearing isn't boring!"

The maven-in-training appears a contradiction in terms. Teen Vogue describes Tavi as an "outspoken wunderkind to watch" with a "fearless fashion sense that puts even the most daring fashionistas to shame." Yet toy-maker Mattel lists her as one of "Barbie's Ten Women to Watch."

Quirks and praise aside, Tavi has her skeptics. Elle's Anne Slowey tells Widdicombe that Tavi is interesting but "she's now a product. ... She very quickly turned herself into one. She was obsessed with an industry, and she turned it around so that [the industry is now] obsessed with her."

The 30-year-old pastor and father of five has persuaded more than 100 celebrities, including actress Eva Longoria, to participate in the first Twitter Celebrity Auction to benefit Haiti. TWITCHANGE, which starts Wednesday, has already garnered more than 2 million page views by people curious about the auction. Over the next ten days, Twitter users can bid to have their favorite celebrity follow them, retweet them, mention them, or all of the above.

"This is pretty much the biggest thing I've ever done," King told CNN. King, a pastor at Courageous Church in Atlanta, Georgia, said he got involved in efforts to help Haiti after seeing pictures on Twitter. It led him to start the nonprofit aHomeInHaiti.org to help raise money for permanent housing for orphans in Haiti. The organization has already provided more than $1.5 million worth of tents to house victims of January's earthquake.

All proceeds from the TwitChange auction will go toward rebuilding the Miriam Center, which helps, educates and nurtures Haitian children with cerebral palsy, severe autism, and other major life challenges, according to the group's website.

A native of Kentucky, King - who experienced his own personal tragedy when he was assaulted as a teen - believes he was "called to serve others." His motto: "Love God, Love People, Prove It."

United Airlines is banking on Aviate Academy, the first flight school owned by a major US airline, as its solutionâ€twitter.com/i/web/status/1â€¦5q
cnni

6:47 pm ET January 28, 2022 RETWEET
As the US has been warning the world of a potentially "imminent" Russian invasion of Ukraine, one foreign leader inâ€twitter.com/i/web/status/1â€¦NV
cnni